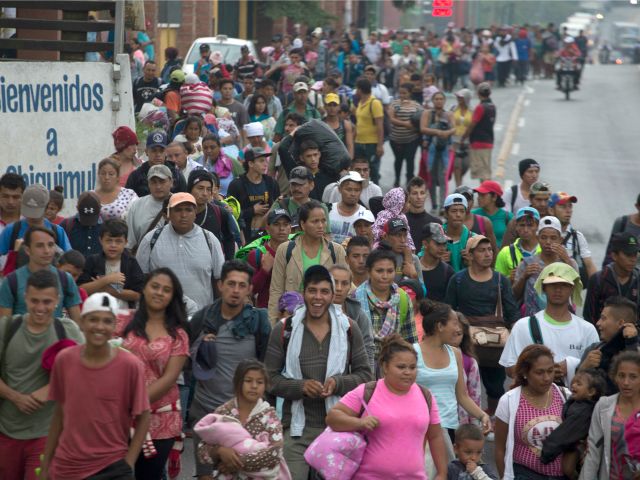 President Donald Trump is using the rising flood of job-seeking migrants at the U.S.-Mexico border to show how Congress has refused to reform migration laws or even fund enough detention beds.

The rising inflow is forcing officials to release the overflow population of Central Americans into the U.S. job market, even though federal data shows that only about 1 in 50 migrants are eventually approved for asylum.

Trump is using the so-called “caravan” of migrants as a high-profile weapon against pro-migration Democrats, including Sens. Jon Tester, Sherrod Brown and Claire McCaskill.

….The assault on our country at our Southern Border, including the Criminal elements and DRUGS pouring in, is far more important to me, as President, than Trade or the USMCA. Hopefully Mexico will stop this onslaught at their Northern Border. All Democrats fault for weak laws!

I am watching the Democrat Party led (because they want Open Borders and existing weak laws) assault on our country by Guatemala, Honduras and El Salvador, whose leaders are doing little to stop this large flow of people, INCLUDING MANY CRIMINALS, from entering Mexico to U.S…..

….In addition to stopping all payments to these countries, which seem to have almost no control over their population, I must, in the strongest of terms, ask Mexico to stop this onslaught – and if unable to do so I will call up the U.S. Military and CLOSE OUR SOUTHERN BORDER!..

Republicans must make the horrendous, weak and outdated immigration laws, and the Border, a part of the Midterms!

The latest caravan of migrants moving through Mexico underscores the dramatic migration from Central America into the United States.

“It kinda of helps Republicans to have several thousand people coming across the border right before the election,” said Mark Krikorian, director at the Center for Immigration Studies. “It concentrates the mind, and it shows in a big way what the consequences are of Democratic obstruction and Republican leadership ambivalence about fixing the loopholes and funding detention,” he said, adding:

It makes sense. Some might see that as cynical, but it is not — they are saying this is the consequence of what Congress has failed to do. They are basically rubbing [Democrats’]  noses in it, and showing that Congress has to act or that our border will be basically meaningless. Anyone who comes to the border who has been coached with a plausible story is now going to be let into the United States.

The inflow is rising because Central Americans in the United States are showing their relatives via cellphones how easy it is to get through the border loopholes and then find jobs. The loopholes are being kept open by Democrats and by business-first Republicans in Congress, despite the 2016 election results and Trump’s agency reforms.

From October 2017 to the end of August 2018, 136,000 migrants walked across the border, joining hundreds of thousands who have arrived since roughly 2010. That illegal-immigrant movement is also being amplified by the caravan of several thousand Central American migrants who now heading for California.

Honduran migrant caravan grows to 4,000 and the Mexican government has sent an extra 500 federal police to its border with Guatemala in anticipation of their arrival, according to US govt documents obtained by @NBCNews https://t.co/UcApgEu2gC

On the news in Guatemala they are saying that you can get a work permit if you’re in a family, if you’re coming with your child, and that you’re going to be released,” Lucero said.

He added that human smugglers are taking note. Immigrants are paying smugglers to get them to the border. Instead of attempting to cross into Arizona illegally, the smugglers are instructing the immigrants to find a border patrol agent and turn themselves in.

“They were told by smuggling organizations and the smugglers that all they have to do is jump over the wall or however they may cross, seek out an agent, and then they will be able to claim asylum that way,” explained Jose Garibay, a border patrol agent in Yuma recently told KTAR News.

The ACLU, immigraiton lawyers and other pro-migration groups say the migrant wave is driven by fear of crime.

But the migration is organized by labor-trafficking cartels, legally protected by U.S. and foreign migration advocates, and funded by U.S. employers who hired low-wage illegals instead of working-class Americans.

The cartels’ labor-trafficking business is providing them with billions of dollars in revenue, partly because the catch-and-release process allows migrants to get work in the United States and pay off their debts. But that huge movement of cheap labor — at least 400,000 work-permits in 2017 — is clipping wages for blue-collar Americans, including many Democratic voters.

But Congress has refused to help curb the economic migration. For example, in February, a tacit alliance of pro-migration Democrats and business-first Republicans in the Senate blocked Trump’s “Four Pillars” reforms. In August, business-first Republicans in the House — led by Oklahoma Rep. Kevin Yoder — pushed a bill that would dramatically expand the legal inflow of wage-cutting foreign workers.

Also, Senate Democrats — led by Sen. Tester — have rejected Trump’s request for funds to operate 52,000 detention beds and instead agreed to fund for only 40,520 detention beds. The House appropriations committee only approved funding for 44,000 beds, regardless of any intervention by Trump’s Hill liaison aides.

Tester’s Democrats and the GOP members on the Senate panel also blocked the hiring of additional agents to repatriate migrants who lose their asylum claims.

Senate Democrats, including Tester, McCaskill, Brown and Indian Sen. Joe Donnelly, are also pushing legislation that would tie the hand of border enforcement officers by barring the arrest and detention of migrants who bring children. Other Democrats want to give a free pass to migrants who say they are pregnant.

The clogged legal process means that few migrants are deported out of the U.S. job market, even though very few are approved for asylum. Breitbart News reported:

The data shows that 94,285 “family unit” migrants were registered as they crossed the border between October 1, 2016, and September 30, 2017. The data does not say how many of the migrants were adults, youths or children. Most family units are fragments. For example, they consist of a mother with younger children. The father often travels separately, sometimes with older children.

But only 252 migrants of the 94,285 migrants were quickly returned to their home country, and just 1,095 were formally “removed” after legal adjudication and deported home by the end of June 2018.

Business groups are eager to downplay the rising migration levels. Any public dispute over illegal immigration damages their routine claim that the much-larger annual inflow of 1.1 million legal migrants helps investors and employers without imposing economic and civic harm on working Americans.

Unauthorized crossings of the southwest border are down over 80% since 2001. Gonna hop in the car to work now.