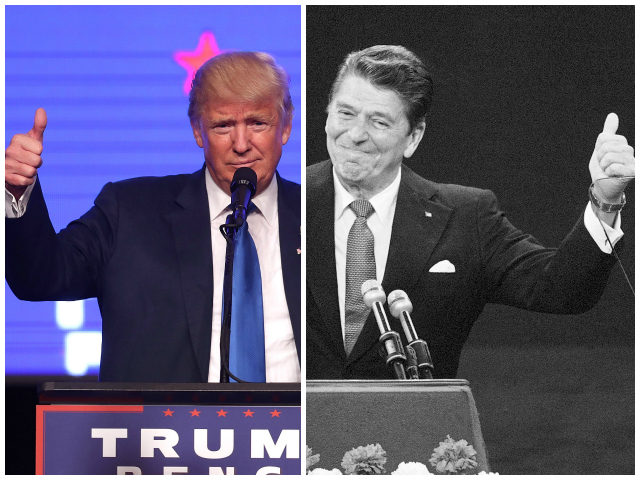 In a new book titled Trump’s Enemies, President Donald Trump says his accomplishments have made him “far greater than Ronald Reagan” and argues, “I blow Ronald Reagan away.”

President Trump also criticized some conservatives who he says do not seem to be giving him much credit for the accomplishments he has made while in office.

“The amazing thing is that you have certain people who are conservative Republicans that if my name weren’t Trump, if it were John Smith, they would say I’m the greatest president in history and I blow Ronald Reagan away,” Trump said.

Trump added, “All these guys that if they looked at my agenda with a different name…and he got the biggest regulation cuts in history in less than two years, judges, environmental stuff, getting out of the Paris horror show. If you said that conservative president John Smith did that, they would say he’s the greatest president. Far greater than Ronald Reagan.”

In the book, authored by Trump supporters Corey R. Lewandowski and David N. Bossie, Trump insists that “85 percent” of the media is “totally corrupt.”

“You can do something great and they will make it look bad, to a point that you don’t even understand why they’re doing it. Why do they want to make it look bad? Whether it’s fixing the military or cutting regulation,” Trump said. “But people have no idea how false and corrupt much of the media is. When you read some of these stories, you pick up the New York Times, and they don’t call you for sources. They’ll say, ‘sources say,’ and there are no sources. So that would be the one thing that surprised me. The level of corruption and the level of fake news.”