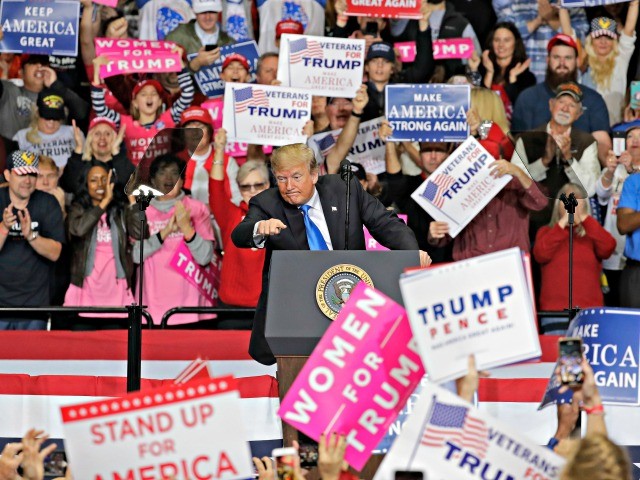 President Donald Trump denounced the media on Friday for trying to pin the recent bomb scare on him and his supporters.

“We have seen an effort by the media in recent hours to use the sinister actions of one individual to score political points against me and the Republican party,” Trump said.

The president commented on the news at his rally in Charlotte, North Carolina after authorities apprehended the Florida man suspected of sending pipe bombs to prominent Democrats.

Trump condemned political violence and called for an end to the politics of personal destruction, especially from the media.

“Political violence must never ever be allowed in America and I’ll do everything in my power to stop it,” he said. “The media has a major role to play, whether they want to or not.”

The president paused as his supporters continued to chant “CNN SUCKS!”

“They have a major role to play as far as tone, as far as everything,” Trump said. “The media’s constant unfair coverage, deep hostility, and negative attacks only serve to drive people apart and to undermine healthy debate.”

Trump recalled that Republicans did not use the aftermath of the Steve Scalise shooting by a left-wing radical to score political points.

“We did not use that heinous attempt at mass murder for political gain, because that would have been the wrong thing to do,” he said.

Trump was fiercely defensive of his supporters, reminding them of the media’s tone against them.

“The media has tried to attack the incredible Americans who support our movement to give power back to the people,” Trump said. “Our supporters are some of the most honest, wonderful, principled, hard working, patriotic people on the face of God’s earth.”