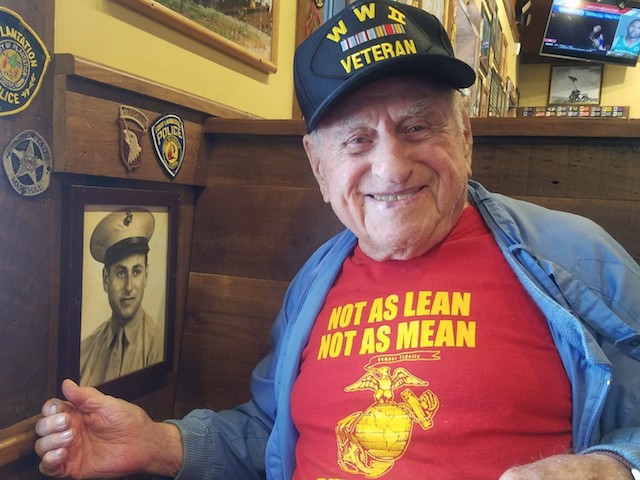 President Donald Trump met with dozens of world leaders on Wednesday at the United Nations, but he also took time to call a Marine celebrating his 100th birthday.

With the help of an assistant on social media, Marine Sam Nebesky has chronicled the celebration of his 100th birthday on the social media network.

“Thank you, Donald Trump, for taking the time to call this old Marine to wish me a happy 100th birthday today!” Nebesky wrote on Wednesday. “I can’t believe it!”

Thank you @realDonaldTrump @POTUS for taking the time to call this old Marine to wish me a happy 100th birthday today! I can’t believe it! Thank you for all you’re doing for our country & our nation’s veterans. 🇺🇸 You have made me happy & proud. I’ll never forget it! Sam 🇺🇸

“Thank you for all you’re doing for our country & our nation’s veterans,” he continued in his note to Trump. “You have made me happy & proud. I’ll never forget it!”

The response was highlighted on Twitter by Dan Scavino, President Trump’s social media director who helped coordinate the call.

Nebesky grew up in the Bronx in New York City before joining the military in 1943, according to his assistant Kim Coulter. He served in World War II in the Pacific before returning home.

“I’m one of the lucky Marines, the day you said goodbye to your loved ones you never knew if you would see them again,” Nebesky said to Breitbart News in a statement.

He was stationed in the Marshall Islands in the Pacific and in Okinawa, just off the coast of Japan, and then on to Yokosuka, a military base the Japanese surrendered to the US Navy in 1945.

“Every man wanted to serve the country; it was our duty as Americans,” Nebesky said.
He and his family moved to Florida in the 1980’s and recently reconnected with fellow veterans on an Honor Flight to visit Washington, DC.

Coulter, a volunteer for the South Florida Honor flight, helped build momentum for his birthday on social media.

Scavino spotted the hashtag while monitoring social media and worked with Sam’s assistant to get his phone number.

The president phoned Sam on Wednesday in the afternoon on his home landline phone.

Happy birthday @sam100marine! On behalf of all your Marines, we hope you enjoy this special day. Semper Fidelis! pic.twitter.com/FCteO1rKZH

Sam responded with a personal video.

Thank you @MissionBBQ for making Sam feel so special!!! 🎂 pic.twitter.com/p0iScXpH96

Every day at 12 noon in all @MissionBBQ locations, everything comes to a halt while the National Anthem is played. They love all veterans & law enforcement! I love this place! 🇺🇸❤ @USMC #MissionBBQ #USMC pic.twitter.com/09LcfUrEGV

And he was brought down on the field at a Miami Dolphins football game.

Sam the Marine on the Jumbotron at the Miami Dolphins 🏈 game 9/23/18. Sam was thrilled to be brought down onto the field to be highlighted as the ‘Everyday Hero’. 🇺🇸❤ What a day it was! Sam said it’s a day he’ll never forget. #USMC #WWII pic.twitter.com/l9LPm2WQLJ

He met some of the fans.

Despite being in a wheelchair for most of the day, he proudly stood for the national anthem.