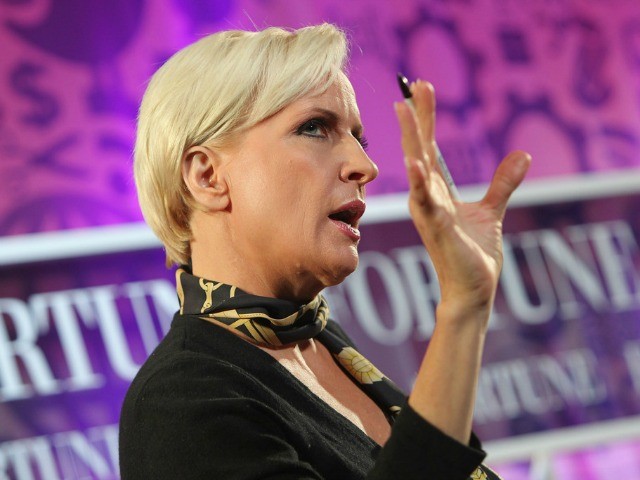 President Donald Trump expressed his surprise that MSNBC’s Mika Brzezinski was not permanently banned from television after describing Secretary of State Mike Pompeo as the president’s “butt boy.”

“If it was a Conservative that said what ‘crazed’ Mika Brzezinski stated on her show yesterday, using a certain horrible term, that person would be banned permanently from television,” Trump wrote on Twitter. “She will probably be given a pass, despite their terrible ratings.”

Brzezinski mocked Pompeo during her MSNBC Morning Joe show with Joe Scarborough’s, describing him as a “wannabe dictator’s butt-boy.”

She apologized flippantly on Twitter after the show, after people protested.

Totally agree with you -SUPER BAD choice of words .. I should have said “water boy”… like for football teams or something like that.. apologize to @SenatorDurbin too! SO SORRY! https://t.co/zIqsGdK3Tk

Brzezinski did not appear on Morning Joe on Thursday after the comment, which her husband Joe Scarborough excused as “a long-planned family event.”

“Congratulations to Richard Grenell, our great Ambassador to Germany, for having the courage to take this horrible issue on!” he wrote.

outrageous. This is totally unacceptable & deeply disturbing. Sexualizing gay people this way is designed to control them & minimize our worth. https://t.co/fQidRbJSxb