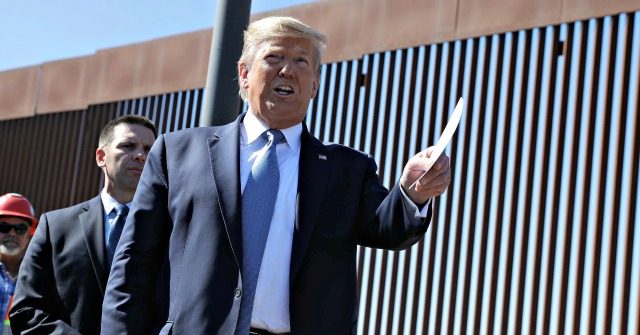 President Donald Trump visited the San Diego border on Wednesday to show off a newly constructed portion of the wall after a fundraising trip in California.

The president traveled via motorcade after a fundraiser to Otay Mesa, a community outside San Diego on the United States -Mexico border to review the latest constructed physical barrier.

He pointed out the new wall structure to the press, which was 24 miles of primary and secondary wall at the border.

He said that over 44,000 bollard panels had been set up for the wall, which was then filled with concrete and rebar.

Trump admitted that he envisioned a solid concrete wall when he campaigned for president, but he was told by border officials that they preferred a wall constructed by concrete-filled bollards so they could see through it.

He added that the steel wall was designed to retain heat, making it harder to climb, plus having an anti-climbing system at the top.

“You can fry an egg on that wall,” e said. The president also acknowledged to reporters that he wanted the wall to be painted black and have spikes but said it was cheaper to let it remain naturally rust-colored.

The president discussed his growing understanding of border barriers, noting that the Southern border would not need much more than 500 miles of wall to secure the border. He cited the existence of natural mountain and river barriers that prevented criminals from crossing.  He did not rule out building additional barriers in the future but said it would depend on whether it was needed.

One border patrol agent spoke about the importance of the border wall to all of the agents, thanking the president for pushing forward on construction.

Trump said he met with Border Patrol prior to constructing the wall, picking the most effective structures to protect the border.

One border security official scoffed at the idea that the wall was a “vanity” project for the president.

“There’s a false narrative out there that this wall is the president’s vanity wall,” he said. “I’m here to tell you right now that that is false.”
He thanked Trump for listening to border patrol agents during the planning and construction process.

“You listened to the agents and you gave them exactly what they asked for,” he said.

One official with Trump confirmed that the structure was funded with regular Congressional appropriations in the FY 2017 and FY 2018 and that that the new wall replaced an inferior structure.
Trump said that he still considered the situation on the border a national emergency, but as more wall went up he could withdraw military forces.

“I hope you’re impressed,” he told reporters as he took questions about the project.

One worker told Trump of a tradition of workers signing the wall if they worked on the wall.

“I’ll sign it,” Trump said, and went to the wall and signed the steel barrier with a marker before encouraging other officials present to do the same.