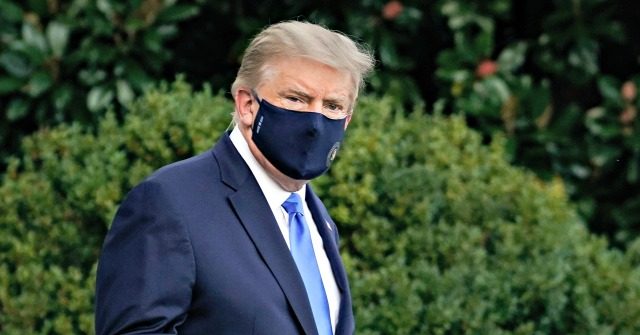 President Donald Trump left the White House on Friday to travel to Walter Reed military hospital “out of an abundance of caution.”

The president, wearing a mask, turned toward the cameras and waved, flashing a thumbs-up sign as he left the White House for Marine One to make the journey.

Reporters shouted questions at the president as he made his way to the helicopter, but he did not speak to them.

The president arrived at the Walter Reed Landing Zone at 6:29 p.m. and waved to the press as he entered an SUV for transport to the hospital.
Before he left, the president posted a video on social media to confirm the news – the first public video since he was diagnosed early Friday morning.

“I think I’m doing very well, but we’re going to make sure that things work out,” Trump said.

The president said that first lady Melania Trump continued to do “very well” after testing positive for the virus.

“Thank you very much. I appreciate it. I will never forget it,” he said.

The White House said that Trump would travel to Walter Reed “out of an abundance of caution” and stay there “for the next few days.”