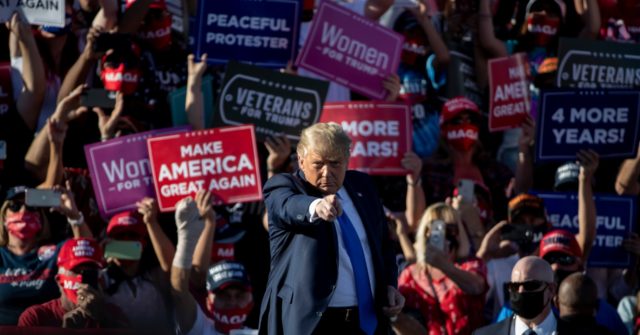 After beating coronavirus, President Donald Trump has returned to the campaign trail with a vengeance, traveling to nine different states and holding at least one rally with supporters every night.

The president did not show signs of losing his voice or his signature energy despite participating in a dozen public speaking events and a handful of fundraisers in the past week.

Trump began the week returning to the campaign trail last Monday, October 12 with a rally in Sanford, Florida.

“I am so energized by your prayers and humbled by your support,” he said to a cheering crowd who welcomed him back to the political fray. “We’ve had such incredible support and here we are. Here we are. But we’re going to finish. We’re going to make this country greater than ever before.”

On Tuesday and Wednesday, Trump did rallies in Pennsylvania and Iowa and joined a virtual event with the New York Economic Club in the Rose Garden.

“I will deliver optimism, opportunity, and growth; they will deliver pessimism, stagnation, decline, and very high taxes,” he said. “Simply put, it’s a choice between a socialist nightmare and the American dream.”

On Thursday, Trump campaigned in North Carolina before participating in an hour-long NBC News town hall event with voters and moderator Savannah Guthrie.

“I’m great, I feel good,” Trump told Guthrie when she asked him if he was suffering any remaining symptoms from the coronavirus.

It appeared absurd that the Commission on Presidential Debates a week earlier had declared that the presidential debate scheduled that night had to be held virtually for safety and health reasons.

The president predictably balked at the idea of a virtual debate and the substitute event with Guthrie and a crowd of voters in Florida went smoothly.

On Friday, the president did three events – one speech highlighting his efforts on behalf of America’s seniors and a rally in Ocala, Florida, and a rally in Macon, Georgia.

The president seized on the news, returning to the idea that not only did the vice president knowingly allow his son to profit from his influence overseas but also enjoyed the benefits.

“The Biden family is a criminal enterprise,” Trump said at a rally in Georgia. “Frankly, it makes crooked Hillary Clinton look like an amateur.”

On Saturday, the president returned to campaign in Muskegon, Michigan, and Janesville, Wisconsin, reprising classic campaign themes that got him elected in 2016.

“For the last 47 years, Biden’s shifted away your jobs, shut down your factories, threw open your borders, ravaged our cities while sacrificing American blood and treasure in these ridiculous, endless foreign wars,” Trump said at his rally in Michigan.

Trump left the rust belt on Saturday night and flew to Las Vegas which served as a base point for campaign events in the West.

The president began Sunday morning by attending church at the International Church of Las Vegas at 9:00 a.m. before flying to California for a fundraiser and returning to Nevada for a campaign rally in Carson City, Nevada.

At his rally, Trump recalled recovering from the coronavirus after he went to Walter Reed Hospital for treatment two weeks earlier.

The president will conclude his Western campaign swing with a rally in Prescott, Arizona Monday night before returning to the White House.