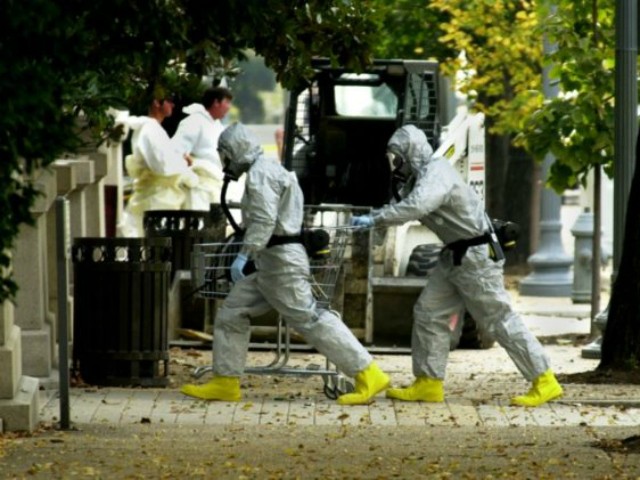 President Donald Trump signed a memorandum Tuesday updating the U.S. biodefense strategy that he said will “strengthen our nation’s defenses against biological threats to health and safety.”

“The implementation of these actions will promote a more efficient, coordinated, and accountable biodefense enterprise,” President Trump announced Tuesday. “Taken together, they represent a new direction in the nation’s defense against biological threats.”

The National Biodefense Strategy builds on lessons learned from past biological incidents, such as the 2001 anthrax attacks, the 2009 influenza pandemic, and the 2014 West Africa Ebola epidemic, to develop a more resilient and effective biodefense enterprise. Biological threats emanate from many sources, and they know no borders. They have great potential to disrupt the economy, exact a toll on human life, and tear at the very fabric of society. My administration will take steps to improve our understanding of the risks posed by biological threats and to respond to them effectively and efficiently.

Azar and National Security Adviser John Bolton briefed reporters at the White House on the strategy before the announcement. Azar indicated he will now serve as the point person of responsibility for this.

The president explained that the memo also “establishes a Cabinet-level Biodefense Steering Committee to support the transformation of America’s biodefense enterprise and to protect Americans from bioterrorism and natural outbreaks of deadly diseases.” The third provision of the memo directs the national security advisor, currently Bolton, to “review biological threats and prioritize biodefense actions annually, which will enable the government to better anticipate, prevent, prepare for, respond to, and recover from biological incidents.”

“My administration is changing the government’s approach so that it can adapt to the complex nature of biological threats,” said Trump. The strategy will address biological threats both naturally occurring, deliberate, and accidental. Trump called it “a first for the United States government.”

“We will comprehensively evaluate our national biodefense needs and monitor implementation of our strategy on an ongoing basis in order to prioritize effectively the government’s biodefense resources and actions,” said the president, who expressed the administration’s commitment to addressing a comprehensive range of threats to the U.S.

“With these actions today, I am reaffirming my unwavering commitment to protecting the American people, the American homeland, and the American way of life,” said Trump.

Azar talked in the morning briefing about significant roles several agencies played during the 2014 Ebola crisis under the Obama administration and said that “it was widely recognized that early on, the response was not nearly as well coordinated as it should have been.” The HHS secretary said the new system will allow the U.S. to identify gaps in the system.

Azar told reporters that the strategy represents a distinct aspect of national security. He then offered up a quote from then-private citizen Donald Trump in 2000: “Our adversaries understand that if they are able to blindside us … they will be much more likely to succeed in blackmailing us.” He stated that under the new strategy such a blindside is much more difficult for our adversaries.

Bolton told the reporters the U.S. is “constantly monitoring a range of countries and terrorist groups for the possibility that they would acquire a biological weapons capability that threatens.” He said that “an attack could come in a lot of different ways.”

Asked if there was a specific threat that sparked the new strategy, Bolton said the strategy was mandated by statute and was one of the things he has prioritized since taking his position in the Trump administration.