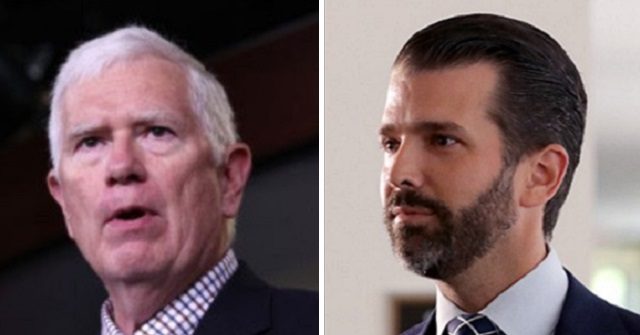 The younger Trump explained his support in a statement announcing a fundraising email.

“There’s a reason that my father, Donald Trump, has endorsed Mo Brooks for U.S. Senate,” Trump, Jr. said in a statement accompanying the announcement. “And there’s a reason that I endorsed him too: Mo is a rock solid conservative, who has stood shoulder-to-shoulder with us as we move the America First mission forward. If we want to make a change, we’re going to have to win big with candidates who embrace the America First agenda. And that starts with Mo Brooks in Alabama. Mo doesn’t worry about making friends with Democrat leaders or political elites who don’t represent YOU.”

“He doesn’t care about being popular with the anti-American mobs,” he continued. “He cares most about making life better – making it GREAT – for hard-working American families like yours. He’s been a consistently conservative member of Congress and one of my father’s greatest allies since the day my father took office. But let me tell you my favorite thing about Mo: he has the will to accomplish what others say cannot be accomplished. When people tell Mo it can’t be done, it only guarantees it WILL be done. When they say something is impossible, it only fuels him to make sure it happens. I know first-hand that the movement we started with my father is stronger than ever and it WILL carry us to better times.”

“But we have to stand together now,” Trump, Jr. added. “We can’t back down to the fake news or the mainstream narrative. We have to stand up and support the strong candidates who support our values. Mo Brooks is truly one of those and there’s no doubt in my mind: he belongs in the U.S. Senate.”

Some in the media had speculated former President Donald Trump’s support for Brooks had waned since a rally in Cullman, AL last year. However, those within the Brooks campaign hope this statement from Donald Trump, Jr. puts those rumors to rest.

“What a great day for the MAGA movement, and a bad day for Congressman Brooks’s RINO opponents!” Brooks campaign spokesman Will Hampson said in a statement. “Don Jr. has been an incredible asset for our campaign, and he has made it clear that both he and President Trump are 100% behind Mo Brooks in this Senate race. We look forward to victory in May, thanks to the Trump family and all of the great MAGA patriots in Alabama!”

CNN seems to be very excited about the Alabama Liz Cheney jumping in against MAGA Mo Brooks. #alsen https://t.co/CpUqNbc6Qc

Alabama Republican voters will have the opportunity to select their preference on May 24. Should none of the candidates cross the 50% threshold, the contest goes to a runoff on June 21.