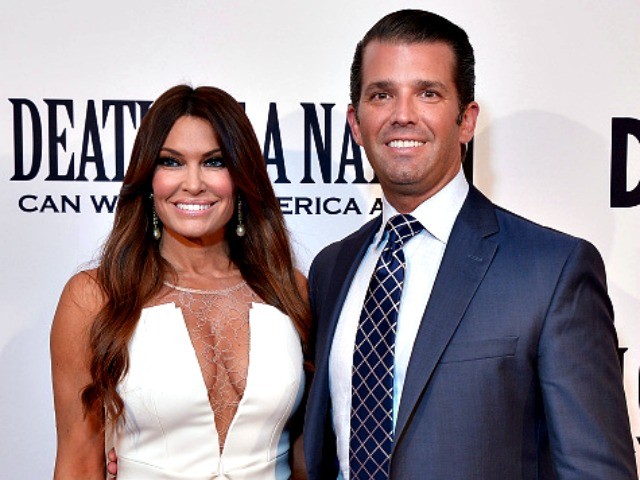 Donald Trump, Jr., and Kimberly Guilfoyle hit the campaign trail in Ohio together on Thursday, conducting a series of events for Republicans in the Buckeye State designed to hold the House majority, add to the Senate majority, and keep the governor’s mansion in GOP hands in the critical 2018 midterm election.

A source familiar with their campaigning in Ohio told Breitbart News that Trump, Jr. and Guilfoyle held a lunchtime fundraiser in Powell, Ohio, for the GOP’s U.S. Senate nominee in the state, Rep. Jim Renacci (R-OH), then traveled to Delaware, Ohio, for a meet-and-greet with Rep. Troy Balderson (R-OH).

The Renacci fundraiser pulled in more than $50,000 for the GOP candidate, and the Balderson event drew more than 100 people. Balderson won the special election in Ohio’s 12th district earlier this year, and faces a rematch against his Democrat opponent in November in a critical must-hold House district for Republicans to retain the majority in the U.S. House of Representatives.

From the Balderson event, Trump, Jr., and Guilfoyle traveled to Salem, Ohio, to headline a fundraiser for GOP gubernatorial nominee former U.S. Sen. Mike DeWine (R-OH) where they raised more than $250,000 for the ticket.

“With the exception of of President Trump, I’m not sure there’s anyone in Republican politics today that can light a crowd up like Don and Kim can. They’re an amazing one-two punch,” a Republican strategist working on the midterms this year told Breitbart News.

This was the first time on the campaign trail together for Trump, Jr., and Guilfoyle. The pair, who are dating, comprise the president’s eldest son and the former Fox News host who now works for the pro-Trump super PAC America First Policies.

“I was thrilled to return to Ohio to support conservative candidates who will ensure President Trump’s agenda is not reversed,” Guilfoyle added. “Over the next 50 days I look forward to doing my part to keep Congress in conservative hands.”

Ohio is one of the key battlegrounds in 2018, in that DeWine faces former Barack Obama administration Consumer Financial Protection Bureau (CFPB) chief Richard Cordray at the top of the ticket in the governor’s race. Recent polling has put DeWine well ahead of the hard leftist Cordray.

In the Senate race, Renacci faces the hard leftist Sen. Sherrod Brown (D-OH) in a closer and tougher race. Polling has shown Brown with a slight lead all season, but Renacci has been running a fierce campaign aggressively challenging Brown in a manner many political pundits and prognosticators did not expect.

“I was thrilled to welcome Donald Trump Jr. back to Ohio today,” Renacci said in a statement on Thursday. “Don, President Trump, and Vice President Pence have been staunch supporters of my campaign, and I appreciate all their efforts to help me defeat liberal career politician Sherrod Brown in November.”

Trump, Jr., and Guilfoyle were joined on the trail in Ohio by Republican National Committee (RNC) co-chair Bob Paduchik, who told Breitbart News that the Balderson event was very important as well.

“Don is such an important leader and spokesman on Second Amendment rights,” Paduchik told Breitbart News. “It was great having him campaign for Troy Balderson’s re-elect where his opponent Danny O’Connor wants to not only ban guns but have the government confiscate them.”

If Republicans do well at the top of the ticket in the banner Senate and Governor races in Ohio–and for that matter other states too–they could have a shot at holding the House majority in November by helping candidates like Balderson hold their seats. The Democrats are challenging dozens of races, but only need to take 24 net seats in November to give House Minority Leader Nancy Pelosi back the Speaker’s gavel.