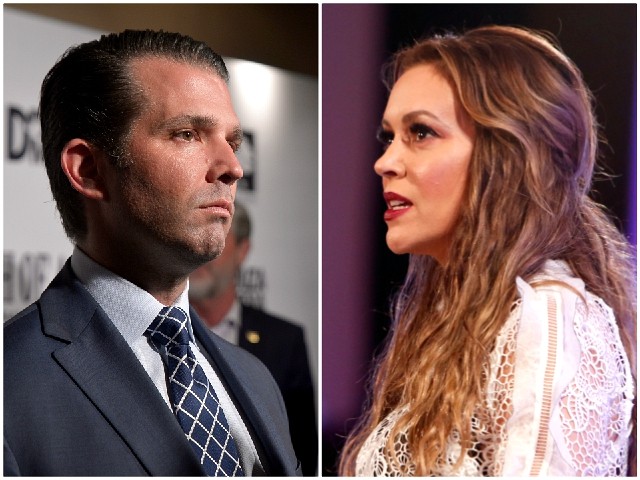 As Breitbart News reported, West posted to his Instagram account a photo of himself rocking his red MAGA hat with a message of support for President Donald Trump and his economic nationalist agenda. The post came after West delivered a pro-Trump speech during his appearance on Saturday Night Live.

“This represents good and becoming whole again,” West wrote of the MAGA hat. “We will no longer outsource to other countries. We build factories here in America and create jobs.”

Trump Jr. immediately hit back at Alyssa Milano, writing in a post, “Shocking! It’s almost like this white liberal thinks she’s entitled to bully this black free-thinker into not being himself or believing whatever he wants.”

Shocking! It’s almost like this white liberal thinks she’s entitled to bully this black free-thinker into not being himself or believing whatever he wants. https://t.co/GVwPLiSxf5

West was also lectured to and scolded by singer Lana Del Rey, where she said he needed “an intervention” because of his support for Trump, Breitbart News reported.

“If you think it’s alright to support someone who believes it’s OK to grab women by the pussy just because he’s famous then you need an intervention as much as he does, something so many narcissists will never get because there just isn’t enough help for the issue,” Lana Del Rey said.