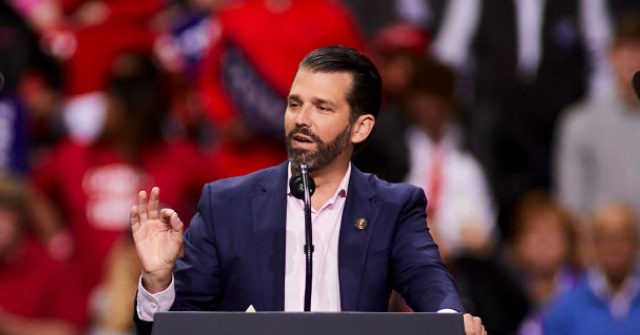 The President’s son, Donald Trump Jr., has called out Instagram for allegedly removing him and President Trump from search suggestions.

In a message on his Instagram account, Don Jr. called out the platform for failing to display his handle or his father’s, despite their huge following on the platform. He also drew attention to tech platforms’ propensity to “shadow-ban,” or covertly suppress conservative accounts.

Hey @Instagram I’m sure this is totally a coincidence (like all the other total coincidences against conservative accounts) but when I search my actual handle and other variations of my name I don’t show up at all in your search engine, and my father didn’t make it either despite having 14,600,000 followers and the same name as me.

Again I’m sure it’s totally an anomaly so I wanted to share, and I’ve attached screenshots from just now so you can see. A few friends pointed this out to me so I figured I’d reach out as it would seem odd to me that an account with almost 2m followers and The President Of The United States (because he has the same name) doesn’t show up in a search but a lot of accounts with virtually no followers do.

I know you like to Shadow-Ban accounts like mine, but I work hard on my content and try to give my followers a view into my life and would love it if you didn’t make it hard for them to see my posts and for me to gain new followers. Hopefully me saying something here like when I called you out for deleting my posts on Jesse Smollett and when you took my new followers down to zero a few years ago despite millions of impressions that week will get you to do the right thing regarding this account and many others like it who may not buy fully into your left wing ideology. Thanks.

It’s not the first time Don Jr. has called out Instagram. In February, Breitbart News exclusively reported that followers of the president’s son said their accounts had unfollowed Don Jr. without their knowledge. Instagram also deleted a post from Don Jr. about hate crime hoaxster Jussie Smollett, in what the tech platform claimed was an “error.”

In a comment to Breitbart News about the search results issue, a Facebook spokeswoman said: “We have resolved the situation and we are undertaking an immediate review to determine what caused this.”

Are you an insider at Google, Facebook, Twitter or any other tech company who wants to confidentially reveal wrongdoing or political bias at your company? Reach out to Allum Bokhari at his secure email address allumbokhari@protonmail.com.