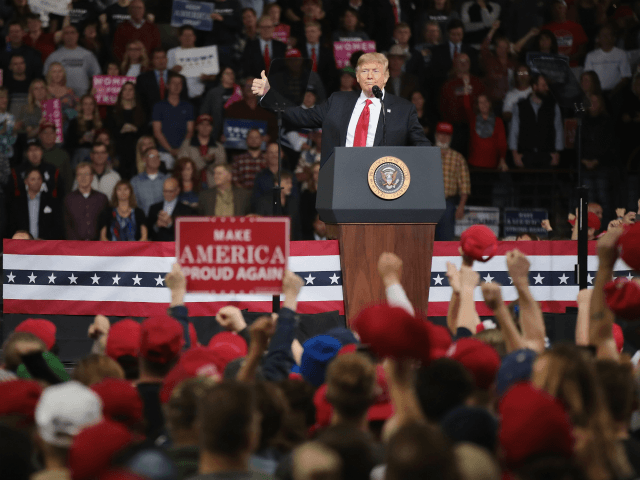 President Donald J. Trump celebrated the confirmation of his second Supreme Court justice pick Brett Kavanaugh on Saturday, energizing his supporters ahead of the midterm elections.

“This is a historic night,” Trump said as he took the stage at a campaign rally in Topeka, Kansas. “I stand before you today on the heels of a tremendous victory for our nation, our people, and our beloved Constitution.”

The president lamented that Kavanaugh and his family were grossly mistreated during the confirmation process and thanked Republicans for standing by his choice for the Supreme Court.

“What he and his wonderful family endured at the hands of Democrats is unthinkable,” he said. “In their quest for power, the radical Democrats have turned into an angry mob.”

Trump warned Americans that Democrats were unfit for power, urging them to vote for Republicans in the upcoming midterm elections.

“Just imagine the devastation they would cause if they ever obtained the power they so desperately want and crave,” he said, referring to the Democrats possibly winning the majority in Congress.

Trump floated the possibility of having an additional Supreme Court nominee or possibly two but warned them that Democrats would likely block them if they ever took power.

“You don’t hand matches to an arsonist and you don’t give power to an angry left-wing mob,” he said.

The president said some of his advisers suggested that he cancel his rally so that he could remain in Washington, D.C. on the day of the critical vote.

Trump signed Kavanaugh’s commission order aboard Air Force One on the way to Kansas and spoke with the judge on the phone after he was confirmed, White House press secretary Sarah Sanders told reporters.

“They’ve always said the biggest thing a president can do is Supreme Court justice,” he said. “Some have had none. We’ve had two in less than two years.”