Former President Donald Trump’s job approval was slightly higher than President Joe Biden’s at the same point in his presidency, according to the average of ratings charted by RealClearPolitics (RCP).

The RCP average for Trump shows on February 3 of his second year in office that he had a slightly better approval rating than Biden has now.

For the first time ever, Trump’s historical average job approval is above Biden’s by .3 percent. On this date in 2018, 41.9 percent approved of Trump and 54.2 percent disapproved: 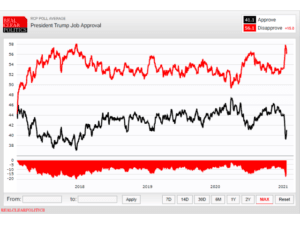 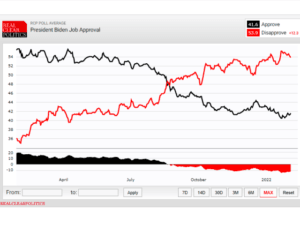 At this point in Biden’s presidency, he is experiencing negative net favorability ratings, a trend that began in August 2021, resulting from poor decision-making during his first year in office.

Under Biden, the country has witnessed an ongoing supply-chain crisis, a record-high inflation rate that has grown from a mere 1.4 percent when he took office to around 7 percent, and the botched Afghanistan withdrawal — which resulted in the death of 13 servicemembers, in addition to United States citizens and allies being trapped in the country.

Democrat candidates in tough elections across the country appear to be avoiding appearances with Biden or even mentioning the president while his approval rating continues to drop.