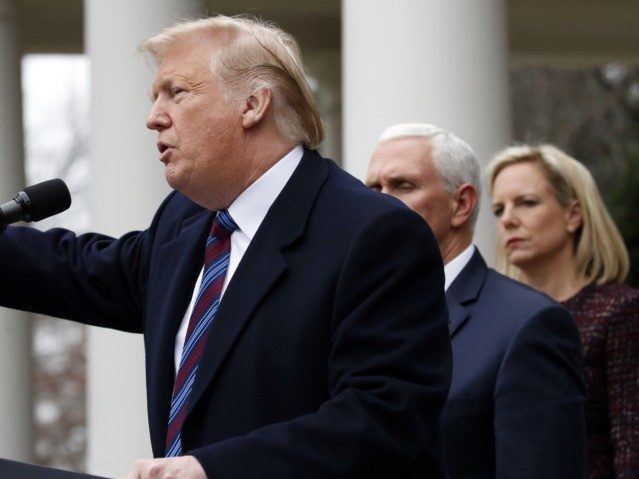 President Donald Trump is delegating three deputies to conduct border-wall negotiations with Democrats over the weekend.

The deputies, however, include son-in-law Jared Kushner, Vice President Mike Pence, Kirstjen Nielsen, the Secretary of the Department of Homeland Security.

Trump’s chief of staff, Mick Mulvaney, is also on the team according to Fox News:

Trump just mentioned that Pence will be involved to try to end shutdown. Fox is told those working on it are DHS Sec Nielsen, Kushner & Mulvaney, along w/Hill aides

Pro-American reformers, however, see all four deputies as members of the GOP’s business-first wing. The GOP’s business wing will trade Trump’s “Hire American” policy in exchange for a border wall that will be weakened by many legal loopholes.

For example, a number of those Republicans are pushing to offer work-permits to the million-plus “DACA” illegals. For example, Colorado GOP Sen. Cory Gardner called for a border deal that includes a DACA deal.

When asked if a DACA extension is part of the weekend talks, Trump responded, “Yeah.”

However, when he was asked about granting citizenship to the DACA illegals, Trump said the Supreme Court needs to make a decision over the legality of President Barack Obama’s 2012 decision to create the DACA amnesty.

Trump also touted new data showing that wages are on track to rise by 4 percent in 2019. Business groups are pressuring Republicans to accelerate the inflow of foreign workers — via a DACA amnesty, for example — because the extra inflow could reduce wages increases before the 2020 election.