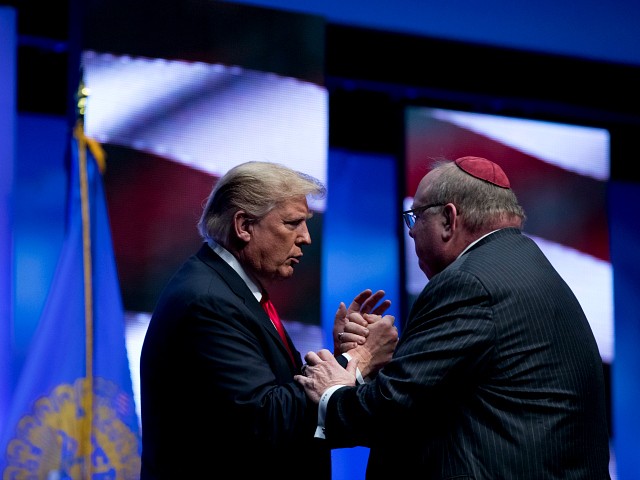 President Donald Trump fiercely condemned anti-Semitism in response to a mass shooting at a Pittsburgh synagogue on Saturday.

“This was an anti-Semitic act,” Trump said in response to reports of eleven deaths at the Tree of Life Synagogue. “You wouldn’t think this would be possible in this day and age, but we never seem to learn from the past.”

The president invited a pastor and a rabbi to offer a prayer at the beginning of his speech at the Future Farmers of America convention in Indiana.

“Anti-Semitism and the widespread persecution of Jews represents one of the ugliest and darkest features of human history,” he said.

Trump acknowledged that the event occurred at a baby-naming ceremony at the synagogue on the Jewish Sabbath day.

The gunman reportedly shouted: “All Jews must die!” after he entered the synagogue.

Trump stated that anti-Semitism should never be tolerated in America.

“The vile hate-filled poison of anti-Semitism must be condemned and confronted everywhere and anywhere it appears,” he said.

The president said that he spoke with the mayor of Pittsburgh and Governor Tom Wolf of Pennsylvania, promising to investigate the attack and to pray for the victims.

“Today, with one unified voice, we condemn the historic evil of anti-Semitism and every other form of evil,” he said. “And, unfortunately, evil comes in many forms.”

He urged Americans to rediscover a common unity on shared values, despite political disagreements.

“It doesn’t mean that we can’t fight hard and be strong and say what’s on our mind, but we have to always remember those elements of love and dignity and respect,” Trump said.

He also praised law enforcement for their swift response to the shooting, acknowledging that some officials were wounded severely during the attack.

“Our hearts go out to the wounded law enforcement officers in Pittsburgh,” he said. “Very badly wounded and very brave.”