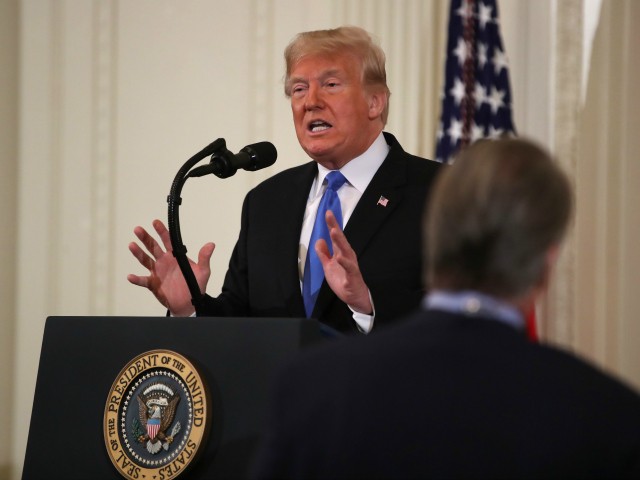 President Donald Trump discussed the results of the midterm elections during a press conference at the White House on Wednesday.

He also noted big results for Republicans in the Senate.

“Last night, the Republican Party defied history,” Trump boasted at the top of the press conference, proudly noting that the GOP expanded the number of seats in the Senate. “This marks the largest Senate gain for a presidential party.”

Trump noted that the Republicans were outspent but still managed to stave off a “blue wave” election.

Trump acknowledged that Republicans lost the House, noting that many incumbent House Republicans retired, making it hard to keep the majority.

“It’s very difficult when you have that many retirements,” he said.

Trump highlighted some bright spots in the House Republican races, including in Kentucky and Minnesota, but he mocked some anti-Trump Republicans for losing their races, including Reps. Mike Coffman, Barbara Comstock, and Mia Love.

Trump also noted that Republicans continued to hold a majority of the governorships.

He acknowledged he would have to work with Nancy Pelosi, speaker-in-waiting, and gave her a “great deal of credit” for winning a majority in the House of Representatives.

“Hopefully, we can work together next year delivering to the American people,” Trump said.