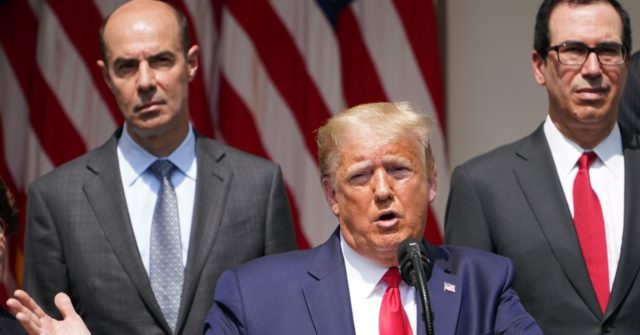 President Donald Trump on Friday called for equal treatment by law enforcement for every American, in response to the death of George Floyd.

“Equal justice under the law must mean that every American receives equal treatment in every encounter with law enforcement, regardless of race, color, gender, or creed,” Trump said. “They have to receive fair treatment from law enforcement.”

The president spoke about the death of Floyd as he addressed the unexpectedly good economic and job numbers.

Several corporate media reporters and Democrats were furious the president referred to Floyd looking down from heaven while suggesting it was a “great day” for him.

PBS reporter Yamiche Alcindor interrupted the president during a signing ceremony of the PPP Flexibility Act, allowing business longer periods of time to use their economic rescue funds to help save their businesses to ask about black unemployment.

“Just to follow up, how would a better economy have protected George Floyd?” asked NBC reporter Peter Alexander.

“How is this a victory?” Alcindor asked.

Trump shushed the reporters and waved off their questions.

“You are something,” he replied to Alcindor’s interruptions.