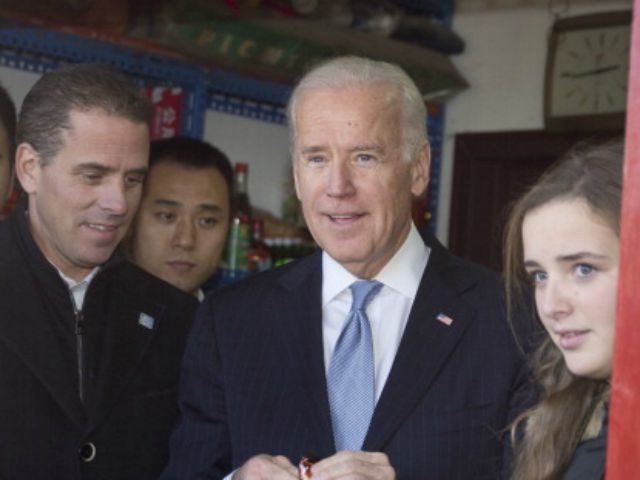 He warned that Hunter’s foreign interests would mean his father, Joe Biden, would never hold China accountable for allowing the coronavirus to spread across the world.

“Biden is not going to make them pay. No. He’s going to get cash. They paid his son a lot of money. What’s he going to do? … That’s like common sense,” Trump said. “Look at the money they’ve taken out of China. I tell you what. He really is, he’s a corrupt politician.”

The president referred to a new story in the New York Post revealing emails from Hunter Biden to corporate interests in China, pursuing a $10 million salary for “introductions alone” and a “MUCH MORE LASTING AND LUCRATIVE ARRANGEMENT,” which he referred to as “much more interesting to me and my family.”

“Yesterday, we learned from newly released emails, and I want to thank the New York Post for showing real bravery, that Joe Biden has been blatantly lying about his involvement with his son’s corrupt business dealings,” Trump said.

The president cited the new reports as further proof that Vice President Joe Biden was lying when he said he never discussed Hunter’s deals with foreign countries.

“These corrupt forces, they don’t see our nation as a protector of its citizens, but as a vehicle for personal profit and power at your expense, and you see it happening right now,” Trump said.

Biden, Trump said, was a corrupt politician who would continue putting his own interests ahead of those of the American worker.

“They keep their jobs while outsourcing your jobs to other countries, countries that you’ve never even heard about,” he said. “They build walls from themselves while forcing your families to suffer the consequences of illegal immigration, drugs, and crime.”

“I’m going to say it more and more, and Facebook and all can try and shut us down, but you know what? Everybody knows it. … He’s corrupt as hell, and everybody knows it,” he said, referring to Biden.