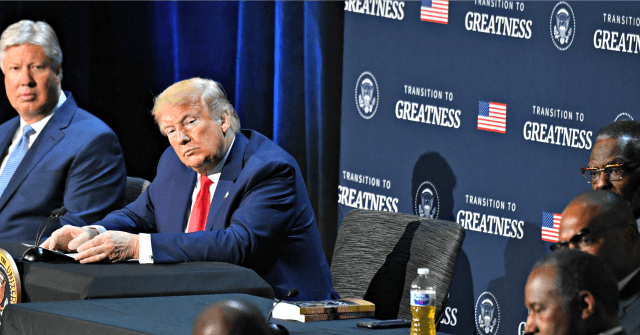 President Donald Trump on Thursday defended police officers across the country, urging Americans to work together to improve race relations.

“We have to work together to confront bigotry and prejudice wherever they appear, but we will make no progress and heal no wounds by falsely labeling tens of millions of decent Americans as racist or bigots,” Trump said.

The president met with faith and community leaders at a Church in Dallas to discuss the issue of policing after George Floyd died in Minneapolis after a police officer pressed his knee on his neck for several minutes.

Trump criticized the left for using Floyd’s death to tear the country apart, with several days of rioting, looting, and vandalism.

“Unfortunately there are some that are trying to stoke division and to push an extreme agenda, which we won’t go for, that will only produce more poverty, more crime, more suffering,” he said.

The president expressed his distaste for the leftist demands to defund police departments.

“We’ll take care of our police, we’re not defunding the police. If anything ,we’re going to other route,” he said. “We’re going to make sure that our police are well trained, perfectly trained, and have the best equipment.”

Trump was astonished by the idea of defunding the police, noting that he had never heard of it before.

“What happens late at night when you make that call to 9-1-1 and there’s nobody there?” he asked. “What do you do, whether you’re white, black, or anybody else, what do you do?”

Trump promised to invest more energy and resources in police training and recruitment as well as community engagement.

He previewed an upcoming executive order that would pursue four goals to move forward on more equality in minority communities.

3) Encourage police departments nationwide to meet the most current professional standards for the use of force including tactics for de-escalation.

The president said he would defend police officers’ rights to use force in dangerous situations.

“That means force, but force with compassion. But if you’re going to have to really do a job if somebody is really bad, you’re gonna have to do it with real strength, real power,” he said.

The president also defended his plan to “dominate the streets” to stop violence and rioting in major cities, pointing to the deployment of the National Guard in Minneapolis that restored peace in the city.

“Yes, there was some tear gas and probably some other things, and the crowd dispersed,” Trump said.

He pointed to the ongoing problem in Seattle, where radical leftist protesters seized six blocks of the city, including capitol hill and a police department precinct headquarters.

“Seattle would be so easy to solve,” Trump said.