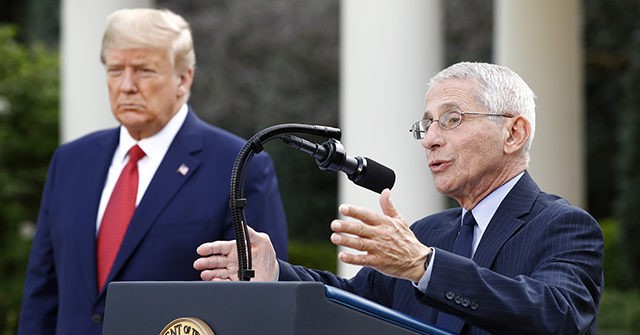 President Donald Trump defended his criticism of Dr. Anthony Fauci on Tuesday, accusing the doctor of being a “Democrat” and a friend of Gov. Andrew Cuomo and his brother CNN host ‘Fredo’ Chris Cuomo.

“I get along with him very well, he’s a Democrat, he’s actually a very good friend of the Cuomo family, he’s been there a long time, I leave him there, he’s a nice guy but he’s been wrong,” Trump said in an interview with Fox and Friends on Tuesday.

Fauci is the director of the National Institute of Allergy and Infectious Diseases and part of the White House Coronavirus Task Force.

“He’s a nice guy, he’s a got a really bad arm, not a good baseball thrower … he’s a little bit sometimes not a team players,” Trump said, referring to Fauci’s widely-mocked starting pitch for the Washington Nationals in July.

The president noted many experts had different views about the coronavirus pandemic, but he would make the ultimate decisions.

When a Fox anchor asked Trump if he was at “odds” with Fauci, he denied it.

On Monday, Trump criticized Fauci for some of his comments on a call with his campaign staff.

“People are tired of hearing Fauci and all these idiots, these people, these people that have gotten it wrong,” Trump said.

The president noted that despite Fauci’s complaint that his television appearances were restricted by the White House, he was always making headlines.

“Every time he goes on television, there’s always a bomb, but there’s a bigger bomb if you fire him,” Trump said. “But Fauci’s a disaster, this guy. If I listen to him, we’d have 500,000 deaths.”