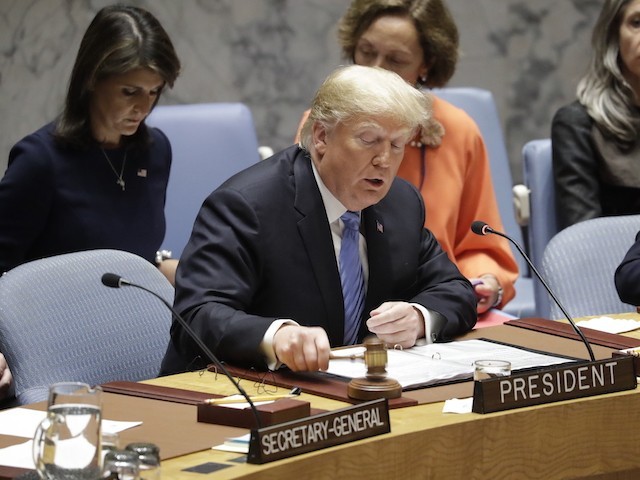 President Donald Trump called out China on Wednesday for interfering in American elections.

“Regrettably, we found that China has been attempting to interfere in our upcoming 2018 election coming up in November against my administration,” he said. “They do not want me or us to win because I am the first president ever to challenge China on trade and we are winning on trade.”

The president made his remarks during his address to the United Nations Security Council in New York City.

“We don’t want them to meddle or interfere in our upcoming election,” he said.

The president has taken a stronger stance towards China this week during his visit to the United Nations General Assembly, despite his claim that he considers President Xi Jinping a “friend.”

“China’s market distortions and the way that they deal cannot be tolerated,” Trump said on Tuesday during his speech to the United Nations. criticizing China for their unfair trade practices.

Director of National Intelligence Daniel Coats also addressed the China threat in a speech on Tuesday at The Citadel Intelligence and Cyber Security Conference.

“The Chinese government uses all of the capabilities at their disposal to influence U.S. policies, spread propaganda, manipulate the media and pressure individuals, including students, critical of Chinese policies,” he said. “China has also targeted state and local governments critical of officials. It is trying to exploit divisions between the federal and local levels on policy and uses investments and other strategies to expand its influence.”