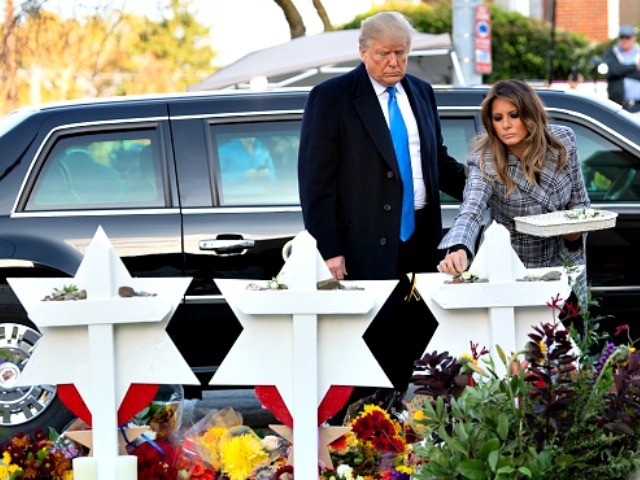 President Donald Trump and first lady Melania Trump visited the site of a horrific synagogue shooting in Pittsburgh on Tuesday afternoon, just days after eleven people were shot and killed during a service on Saturday.

The president and first lady traveled to the synagogue where eleven white Stars of David were placed to honor those who were killed in the Jewish community.

The Trumps were joined by his son-in-law Jared Kushner and daughter Ivanka Trump and his Treasury Secretary Steven Mnuchin. Ambassador Ron Dermer of Israel also joined the group.

The Trumps went into the synagogue to light a candle in honor of the victims and later laid white roses and stones by each of the memorials outside the synagogue.

Rabbi Jeffrey Myers of the Tree of Life synagogue welcomed the Trumps to the site of the crime scene.

“The president of the United States is always welcome,” Myers said on Monday on CNN. “I’m a citizen. He’s my president. He is certainly welcome.”

Funerals were held for three of the victims earlier on Tuesday.

The group also traveled to the hospital to visit some of the wounded where they were being treated.