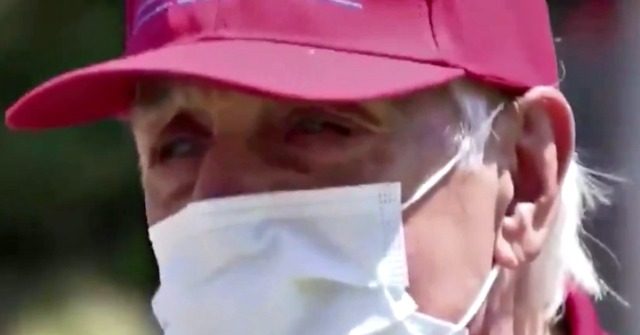 Donald Trump, Jr., on Friday, surprised an 82-year-old Massachusetts man who was beaten this week for supporting his father, President Donald Trump.

Charlie Chace, an 82-year-old Air Force veteran, was beaten while he was waving a Trump sign at a rotary in Fall River. A 27-year-old man, later identified as Aidan Courtright, was charged by police in the incident.

The story has gone viral after Boston’s local Channel 7 news interviewed Chase about it:

An 82 yr old @realDonaldTrump voter wearing a Trump hat was attacked by a 27 year old named Aidan Courtright. He knocked his hat off, body slammed him, kicked him in the ribs + legs, then fled. Two witnesses saw the assault. Listen to how scared this man is. Heartbreaking. pic.twitter.com/mv2fJ7oUFf

An 82 year old wearing a Trump hat was attacked by a leftwing nut job in Massachusetts. All political violence is wrong, but what kind of person commits violence against an elderly man?

If anyone has contact info for the victim please send my way.pic.twitter.com/NuOjnxbxhW

Then, Trump, Jr., tweeted about it this week, and after the Channel 7 intervie, Boston-area conservative radio host Howie Carr scheduled Chace to appear on his show on Friday. Unbeknownst to Chace, live during the interview, Trump, Jr., called in to thank him for his service to the country as a veteran and for his support for his father’s re-election campaign.

I just wanted to say I saw your story, I’m sorry you had to go through that, and we really appreciate the support. That shouldn’t be going on in America. I just wanted to say thank you for that support and thank you for that steadfast loyalty and for your service to our country. I want to have our team be able to get you some extra MAGA schwag, send you some hats and some gear and some flags and everything like that, just to say thank you for everything you stand for my friend.

ICYMI: Charlie Chase, the 82-year-old Air Force vet who was attacked by a 27-year-old with TDS, joined us on the show today and was brought to tears by the surprise guest who called in! Click to listen: https://t.co/2thvho1pZv

Chace teared up on the show, and then said to Trump, Jr., “Well, I have to thank you guys. You don’t know how much you mean to us.” Trump, Jr. replied:

I promise you, it’s guys like you who keep us motivated, patriotic Americans. Again, just thank you so much for your service to this country. It means the world to us, and when I saw the story I obviously tweeted about it. I heard you were going to be on the radio today, so I just wanted to get on and personally thank you, both for today and for your past—your time in the armed services. Thank you so much—you guys are truly a remarkable generation and I wish we had more like you.”

Chace replied that violence from the left will not scare him away from supporting Trump.

“Well, thank you and this will not scare me away—I’m going to be doing this continuously right up until the election,” Chace said.

Carr, the host, intervened to note that Chace is “always working for Republicans,” including distributing newsletters and gathering signatures in his community for ballot initiatives.

After some more back and forth, Trump, Jr. said he looked forward to meeting Chase soon at a Trump rally and added: “Thank you for not backing down.”