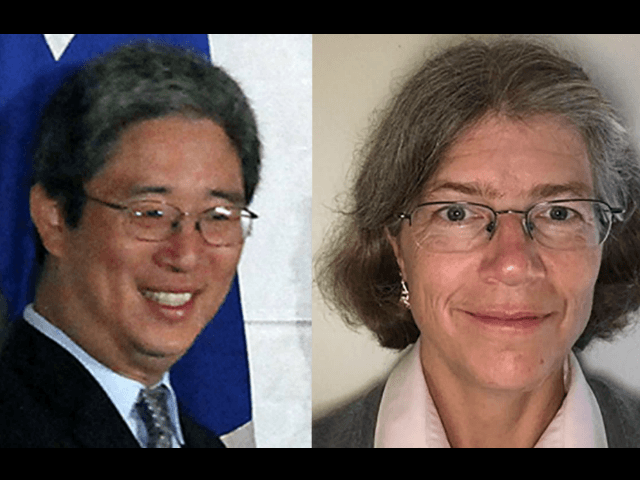 While he was a high-ranking career Justice Department official, Bruce Ohr maintained a joint email account with his wife, Nellie, who was a contractor for the controversial Fusion GPS firm that produced the infamous, largely-discredited anti-Trump dossier, according to recently released testimony.

In a section of the testimony that remains largely unreported by the news media, Nellie Ohr admitted that Fusion GPS co-founder Glenn Simpson “occasionally” sent messages to the joint email account that she shared with her husband.

In his own testimony, Bruce Ohr recounted maintaining direct contact with dossier author Christopher Steele even after the former British spy was terminated as an FBI source over reports that Steele was communicating with reporters. In doing so, Ohr lent credibility to a Republican House Intelligence Committee memo alleging that he served as a back-channel between the FBI and Christopher Steele, who penned the dossier for Fusion GPS.

The dossier was financed by Hillary Clinton’s 2016 presidential campaign and the DNC via the Perkins Coie law firm, which in turn funded Fusion GPS.

During Bruce’s time at the Justice Department, Nellie Ohr worked for Fusion GPS, where she was conducting research looking for connections between Russia and members of Donald Trump’s campaign, including Trump himself as well as the politician’s family, Nellie Ohr testified.

During the course of her testimony, reviewed in full by Breitbart News, Nellie Ohr divulged that she maintained a joint email account with her husband and that Simpson sent emails to that account. The October 19, 2018 testimony before a joint session of the House Judiciary and Government Reform and Oversight committees was released last week.

“Because we share an email address,” Ohr stated. “My husband and I do, that is.”

She was responding to a question about how she knew about an email related to a meeting in the fall of 2016 between her husband and Simpson.

Nellie Ohr said that she could not recall any emails coming to the joint account from Steele, but affirmed that Simpson sent emails to the account she shared with her husband while he was at the Justice Department.

Here is the relevant portion of the testimony transcript:

Q. Okay. I think in the previous round, you said that you weren’t reading emails from Mr. Steele that came to your husband through the joint email account, but obviously, you read this one email.  So I just wanted to clarify what you were talking about?

In further testimony, Nellie Ohr indicated that she used the joint account often:

A. I had a Gmail account but very rarely used it.

Nellie Ohr described emailing reports to Fusion GPS but did not say which email account she utilized.

Q. So previously you said you had a shared email account.

A. With my husband.

Q. Are you aware whether — because it is shared, a shared email account, when emails come in, are you then both reading emails that are arriving in the same email account?

A. We usually kind of can tell who it is intended for.  Whether it is from my friend, then it is probably for me.  So he is not likely to read it.  That sort of thing.

While joint email accounts between husbands and wives are common, this particular email setup may raise questions since Ohr said that Simpson used the shared email account to send messages. The email account existed during the time period Bruce Ohr was involved in receiving dossier information from Steele as part of his role at the Justice Department, exchanges that he himself detailed in his own separate testimony. Nellie Ohr did not say when the joint email account was established, nor was she asked in any of the testimony that was publicly released.

The dossier was used in the FISA application to obtain a warrant to conduct surveillance on Carter Page, a former adviser to President Trump’s 2016 campaign. Then-FBI Director James Comey signed the first FISA application in late October 2016.

The BBC reported that Steele’s dossier information served as a “roadmap” for the FBI’s investigation into claims of coordination between Moscow and members of Trump’s presidential campaign.