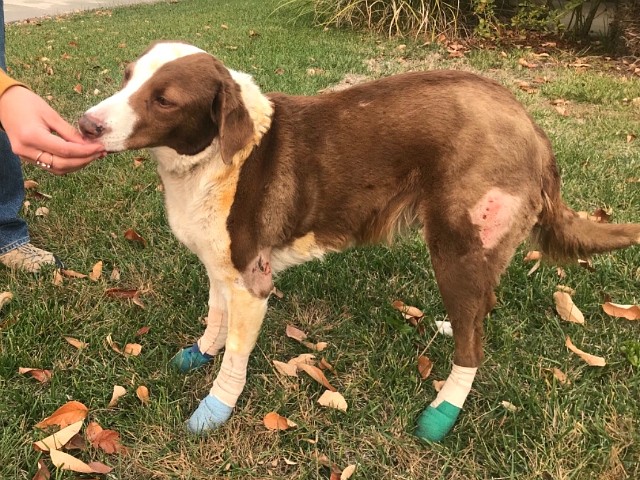 A dog who survived the “Camp Fire” in Northern California was discovered protecting the last house left on a block in the town of Paradise.

Ella, a border collie, spent nearly two days embedded in the rubble and destruction of the wildfire sitting near a neighbor’s home, which was the last house to survive the fire on a block in the town of Paradise, the Visalia Times-Delta reported.

Ella’s owner, Leahna Copsey and her family, had been forced to evacuate their home days earlier while the wildfire raged through the neighborhood, leaving the dog behind.

When her family’s home perished, Ella waited by the last home in the neighborhood not destroyed by the fire in the hopes her loved ones would one day return.

A friend who ventured back into the area on Saturday told the family that although their home perished in the fire, he saw Ella perched in front of their neighbor’s house.

Ella suffered minor burns to her paws and had been exhausted when she was found, but she survived the fire.

“She’s a really good dog, so I was really relieved she was alive and it was only minor burns,” Leahna’s ten-year-old daughter, Clarisa, said.

Ella received treatment for the burns on her paws and is currently staying with Kayla Westman, the family’s oldest daughter.

The California wildfires have caused mass devastation throughout the region, killing at least 71 people as of Sunday.

Thousands more had been left unaccounted for as of Sunday as authorities continue to search for survivors and those who may have perished.