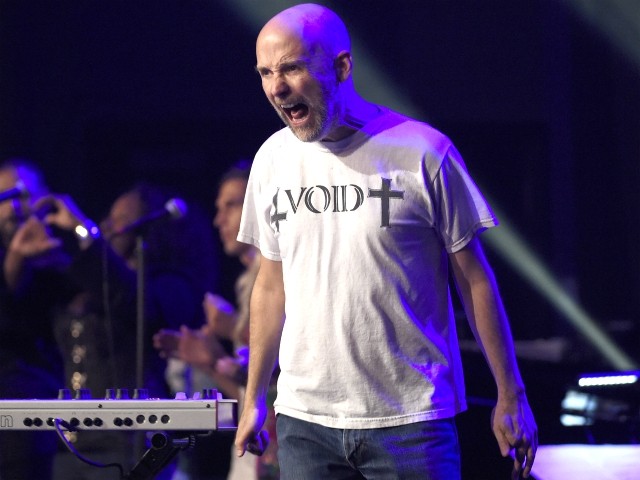 Electronic music DJ and left-wing activist Moby said during a recent get-out-the-vote concert that he is researching ways to emigrate to Canada in case Democrats fail to retake the House of Representatives and President Donald Trump wins re-election in 2020.

“I have to say, like everyone, I am on regular occasion Googling, ‘How do you become an expat? How do you get Canadian citizenship? What are some other countries I consider moving to?’” Moby told audience members at Los Angeles’ Palace Theater last Thursday evening. “Because if the Democrats lose the midterms and Trump wins in 2020, I’m done, because they’re doing everything in their power to erode the sort of checks and balances.”

Moby was joined by a slew of rock’s most popular artists, including Foo Fighters frontman Dave Grohl, Karen O and Nick Zinner of the Yeah Yeah Yeahs, and singer-songwriter Beck.

The sold-out show was organized by Swing Left, which bills itself as a progressive group using technology to connect volunteers with progressive political candidates.

Over the weekend, Moby posted a photo to Instagram posing with Grohl, Beck, and Rep. Adam Schiff (D-CA) ahead of the event.

“They were like, ‘This is ‘The Manchurian Candidate,’ like [Vladimir Putin] has a Russian agent as the president of the United States,” Moby said in an interview with WFPK’s Kyle Meredith. “So they passed on some information to me and they said, like, ‘Look you have more of a social media following than any of us do, can you please post some of these things … sort of put it out there?’”

Last February, the music producer claimed he was given “100 percent real” intelligence proving “the Trump administration is in collusion with the Russian government.”

“The Trump administration is in collusion with the Russian government, and has been since day one,” Moby wrote in an Instagram post.