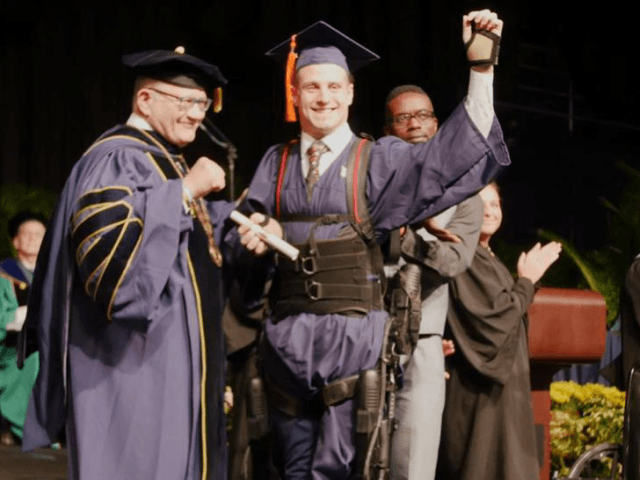 Amenta was rendered a quadriplegic after breaking his neck diving into the shallow end of a pool in 2015. He said his life was “changed completely” by the incident. “Now, I depend on a lot of people to help me do my daily activities,” he said. “So, that’s become a huge challenge in just my everyday life.”

At his lowest point, Amenta nearly gave up the fight. But with the support of his family — and a scholarship from Florida International University — he fought his way toward graduation through the depths of this internal war against the limitations of his own body.

After hours of practice, and with just enough help to get him up onto his feet, Amenta walked the aisle to get his diploma with the help of a medical exoskeleton. While he has regained some movement of his limbs, Amenta would not have been able to make the journey without the next generation technology that augmented his legs and torso.

His walk was framed by the applause of all in attendance, but his own words were even more inspiring: “It doesn’t matter how hard you think things are going to be,” he said. “Maybe you feel that it is impossible for you to make it, but you’ll find people that are willing to help you…that motivated me. That gave me the strength to be able to continue to push myself through and stay positive.”

Amenta will “keep on working on [his] rehabilitation,” he said, “working for my dream to get back on my feet.” The next step? A master’s degree in electrical engineering. With this level of perseverance, it seems a good bet that he’ll make it.