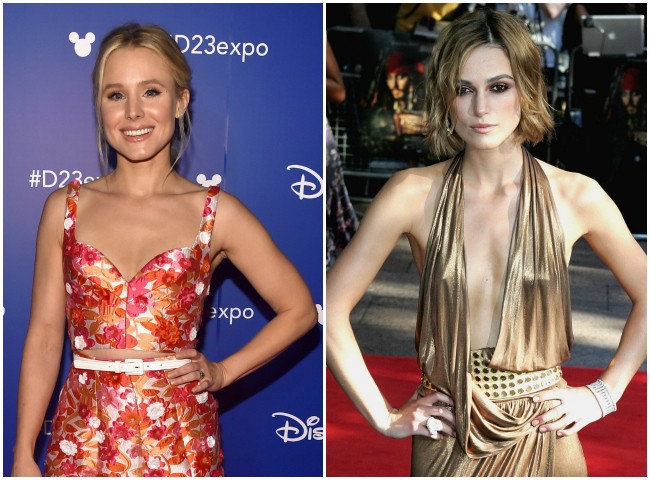 Actresses Kristen Bell and Keira Knightley give voice to several Disney characters, but now both have voiced concerns over the messages they think some Disney princess movies send to kids.

Bell is the voice of Princess Anna in the highly popular animated film Frozen, but recently she told Parents magazine that Snow White is too trusting of strangers by taking the apple from the witch in the 1937 film. Bell is also unhappy that the prince kisses the sleeping princess without previous consent.

Speaking about how she reads Disney stories to her own children Bell said, “Every time we close ‘Snow White’ I look at my girls and ask, ‘Don’t you think it’s weird that Snow White didn’t ask the old witch why she needed to eat the apple? Or where she got the apple?’”

Bell added that she tells her kids not to take food from strangers as Snow White does in the story.

The Veronica Mars star also slammed Snow White for the scene where the prince kisses the sleeping princess without asking permission.

“Don’t you think that it’s weird that the prince kisses Snow White without her permission?” Bell said that she asks her kids. “Because you cannot kiss someone if they’re sleeping!”

Keira Knightley, who has starred as the female hero in several of Disney’s blockbuster Pirates of the Caribbean films and is also featured in this year’s The Nutcracker and The Four Realms, also jumped in to slam Disney animated characters saying that she has banned her children from watching several Disney films.

In a visit to TV’s Ellen Degeneres Show, Knightley said the Disney character Cinderella is banned in her house, “because she waits around for a rich guy to rescue her.”

Knightley also panned the 1989 hit The Little Mermaid, saying she is “quite annoyed about” the part of the story where character Ariel gave up her voice to stay with her man.

While the Love Actually actress noted that the music in the film is great, she doesn’t like the sacrifice plot line. “I mean, the songs are great, but do not give your voice up for a man. Hello,” she said.