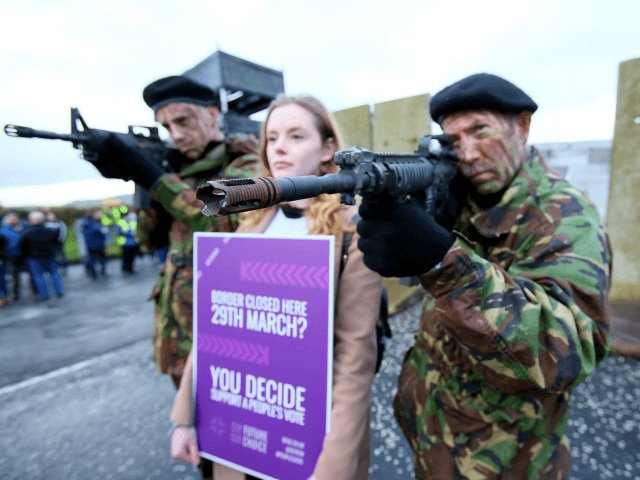 Pro-EU activists erected a Berlin-style wall manned by menacing armed “soldiers” on the border between Ireland and British Ulster to scare people about the supposed consequences of a No Deal Brexit.

The stunt, described as “a disgusting new low” by Brexiteers such as Michael Heaver, given the bloody history along the British-Irish border during the Troubles, saw demonstrators join Mary Lou McDonald, leader of the Sinn Fein party  — widely regarded as the political wing of the Provisional Irish Republican Army (IRA) — raise a concrete barrier studded in camo-swaddled watchtowers, manned by “soldiers” pointing mock firearms threateningly.

Irish taoiseach (prime minister) Leo Varadkar has warned earlier in the week that a No Deal Brexit could “involve people in uniform… possibly a police presence, or an army presence to back it up” — but backpedalled rapidly after his rhetoric as “reckless and irresponsible” by the self-same Mary Lou McDonald mentioned above and opposition politicians in his own country.

Varadkar was forced to clarify that the military presence he envisaged would not be Irish, and was therefore by implication British — but the British government has been absolutely clear it has no intention of militarising the border, and that any “hardening” of the customs border would involve no more physical infrastructure than the currency border, excise border, and Value Added Tax border which already exists.

Brexit boss Michel Barnier’s speech yesterday has opened a can of worms on the Irish border backstop issue.

He said, “”We will have to find an operational way of carrying out checks and controls without putting back in place a border.”

“Whether it is threats of the Belfast Agreement being undermined or the future need for troops on the border, a lot of hot air has been produced by Dublin,” commented Nigel Dodds MP, Deputy Leader of Northern Ireland’s Brexit-supporting Democratic Unionist Party (DUP), which supports Ulster’s place in the United Kingdom and currently provides Prime Minister Theresa May’s minority government with its majority in Parliament.

“By talking about troops on the border, Leo Varadkar is being as irresponsible as those building wooden customs huts, dressing in trench coats and smashing concrete brick walls on the border,” Dodds added.

“Such amateur dramatics do nothing to make progress and only play on people’s fears. It’s complete and utter nonsense.”

“We would be obliged to carry out controls on goods arriving in the Republic of Ireland. My team have worked hard to study how controls can be made paperless or decentralised, which will be useful in all circumstances,”

The supposedly all-important to keep the Irish border, a known weak point for national security exploited by people-smugglers and organised criminals, has been used as something of a cudgel in the Brexit negotiations, according to prominent Leave supporters.

Politicians in Brussels and Dublin have claimed it is not possible to do any sort of deal which keeps the border open unless they agree to keep Northern Ireland in the bloc’s Customs Union and Single Market — requiring the rest of the United Kingdom to either follow suit in one way or another or erect economic barriers between the province and mainland Great Britain.

However, as exit day on March 29th approaches without a deal in sight, the EU has begun to crack, with lead negotiator Michel Barnier admitting: “We will have to find an operational way of carrying out checks and controls without putting back in place a border.”

Varadkar, too, despite his incendiary rhetoric on a militarised border, is said to be privately briefing Irish politicians that customs checks will be carried out at EU ports such as Calais rather than the border with Brexit Britain — on which the Irish economy is massively dependent in terms of trade.

Finally and most crucially – if there is a way to avoid a hard border in Ireland in a no deal Brexit … WHY DO WE NEED A BACKSTOP AT ALL?

Why not just do the no deal solution?