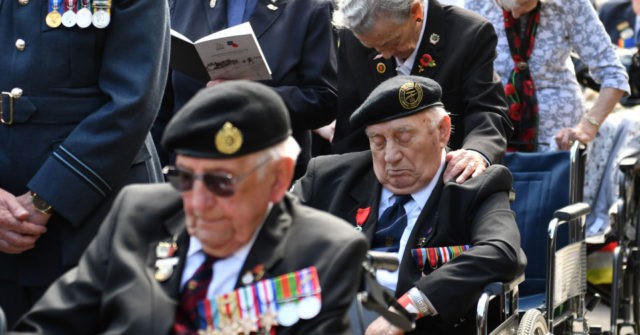 A group of disabled British veterans have been left without accommodation after a hotel close to a Falklands War anniversary event cancelled their bookings in order to make room for alleged asylum seekers.

The Potters Hotel in Aldershot, Surrey, cancelled on scores of elderly and disabled Parachute Regiment veterans who had booked to stay at the hotel while they commemorate the 40th anniversary of the Falklands War on Saturday. Instead, the hotel decided to house alleged asylum seekers via a lucrative government scheme, The Daily Mail reports.

The veterans had opted for the Potters Hotel due to its close proximity to the anniversary event as some of the veterans are severely disabled and therefore have difficulty travelling.

One of the veterans, former paratrooper David ‘Charlie’ Brown told the paper: “I’m disgusted. I booked the room last year as soon as it became available because of my specific requirements.

“There are more than 1,000 ex-Paras due to attend the events in Aldershot in June, so all the other hotels are booked up. I’m furious because the needs of elderly and infirm former soldiers have just been cast aside, in spite of the significance of the events.

“Aldershot is the regiment’s spiritual home. I don’t know how I will be able to go because I can barely walk and standing up is agony.”

The British government forked out up to £70 million of taxpayer’s money to house migrants in three and four-star hotels in 2021, with hotels charging the taxpayer up to £125 a room per night.

‘Coming to a Hotel Near You?’ – Farage Releases Video of Migrants Being Loaded on Coaches at Dover https://t.co/hixd3s9aRk

During the Falklands War – when Argentina illegally invaded the British Falkland Islands on the 2nd of April 1982 – 255 British military personnel were killed. The conflict lasted just 74 days before Argentina surrendered on the 14th of June 1982 – a date that has become a national holiday in the Falklands. 649 Argentinian soldiers were also killed in the conflict.

“Our war veterans being treated like second class citizens evicted to make room for illegal migrants – what are we as a country coming to?” Brinkley questioned.

Britain received a record number of illegal migrants in 2021, with 28,000 making the illegal journey across the English Channel from France to Britain.

The record numbers has overwhelmed the British asylum system with the government having to bring in the army to build camps to accommodate the migrants and the Royal Navy being drafted in too, in an apparent effort to deter those trying to cross illegally into Britain.

However, speaking to Breitbart Brexit boss Nigel Farage said that the government was reducing the Navy to “an expensive taxi service”.

Concerns about the legitimacy of some illegal migrants exploiting the system have also arisen with Home Secretary Priti Patel reportedly considering using X-rays to determine migrants’ ages after it was found that two-thirds of those claiming to be children checked by the Home Office in 2021 were over 18 years old.

Some adult illegal migrants will pose as children as it more difficult for minors to be deported under U.K. asylum rules.