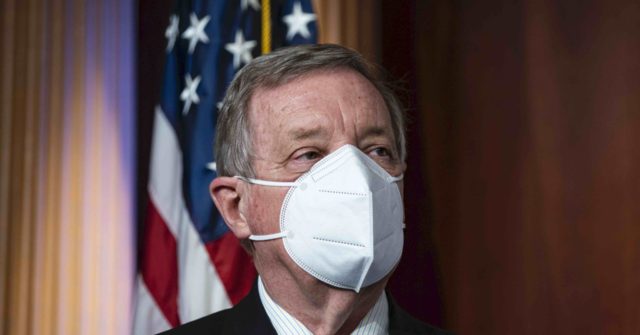 Senate Majority Whip Dick Durbin (D-IL), the second-highest ranking member of the Democratic Party caucus, called Monday for “reform” of the filibuster rule, under which 60 Senators must vote to end to debate for legislation to reach a vote.

Citing the way the late Sen. Strom Thurmond, then a Democrat, used the filibuster to block civil rights legislation, Durbin proclaimed: “The filibuster is still being misused by some Senators to block legislation urgently needed and supported by strong majorities of the American people.”

The filibuster has a death grip on American democracy. It’s time we end its power to hold the Senate hostage. pic.twitter.com/DGZduFqRic

He called for the filibuster to be reformed, or possibly ended, adding that if it persisted, it should restore the practice of the “standing filibuster,” meaning a Senator would have to be present throughout.

One such “talking” filibuster was carried out by Sen. Rand Paul (R-KY) in 2013 to oppose John Brennan’s confirmation to lead the Central Intelligence Agency. (Brennan would go on to launch an investigation into supposed “Russia collusion.”)

In 2018, Durbin strenuously opposed ending the filibuster for legislation, telling ABC News’ This Week: “Well, I can tell you that would be the end of the Senate as it was originally devised and created going back to our Founding Fathers. We have to acknowledge our respect for the minority, and that is what the Senate tries to do in its composition and in its procedure.”

It was not the first time Durbin has flip-flopped on the filibuster. In 2014, he supported the decision by then-Senate Majority Leader Harry Reid (D-NV) to end the filibuster for executive appointments and for judges other than the Supreme Court. He accused Republicans of obstructing President Barack Obama’s nominees.

But in 2002, Durbin joined Democrats to filibuster judicial nominee Miguel Estrada after receiving an internal memo that warned that Estrada, as a Latino, was “dangerous.”

Durbin’s has often used claims of racism and analogies to Jim Crow to attack GOP opposition to Democratic nominees.