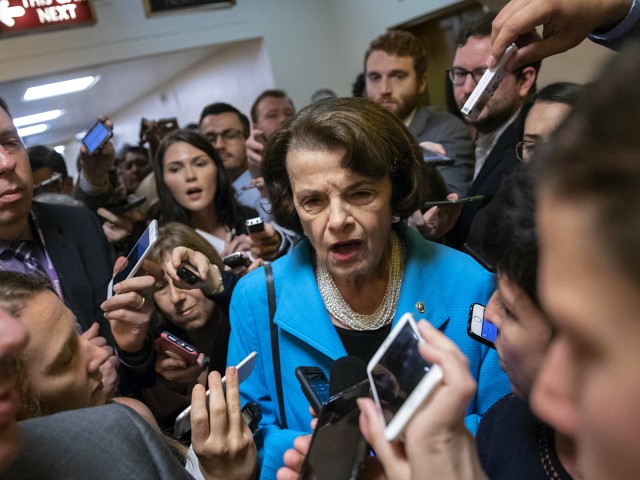 The hearing was finally set Saturday when Kavanaugh accuser Christine Blasey Ford’s legal team agreed tentatively to appear after continual delays and breakdowns in negotiation over requests such as wanting Kavanaugh to defend himself before the accuser testifies.

Then, Sunday, Ronan Farrow and Jane Mayer of the New Yorker broke a new accusation by Deborah Ramirez, a woman claiming an 18-year-old Kavanaugh exposed himself to her at a drunken party as a Yale University freshman. Ramirez, according to Farrow and Mayer, took six days of discussion with her lawyer before she was sure it was Kavanaugh.

Thursday’s hearing should be canceled in light of a disturbing new allegation of sexual misconduct against Brett Kavanaugh. The FBI must investigate ALL allegations.

In response, Feinstein quickly penned a letter to Grassley with additional demands for delays and investigations.

“I am writing to request an immediate postponement of any further proceedings related to the nomination of Brett Kavanaugh,” the letter reads. “I also ask that the newest allegations of sexual misconduct be referred to the FBI for investigation, and that you join our request for the White House to direct the FBI to investigate the allegations of Christine Blasey Ford as well as these new claims.”

Feinstein goes on to cite Farrow and Mayer’s additional reporting about “jungle juice”-fueled sexual assaults by other students at the 1980s Georgetown Prep and an ex-girlfriend of Mark Judge:

Today, Deborah Ramirez came forward with serious allegations of sexual misconduct by Judge Kavanaugh. The New Yorker article recounting her experience states that there are witnesses who can corroborate her claims and who challenge Mr. Judge’s account. An investigation needs to be conducted as part of Judge Kavanaugh’s background investigation by career professionals at the FBI – not partisan staff of the Committee.

Grassley has yet to issue a public response to Ramirez’s claims or Feinstein’s requests.