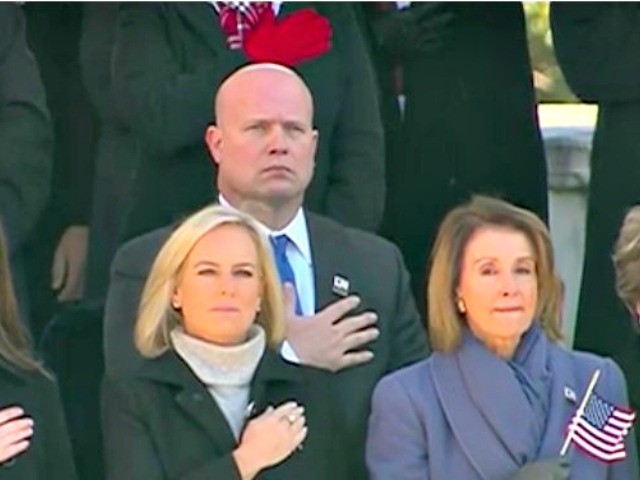 House Minority Leader Nancy Pelosi got a frosty reception at a Veterans Day ceremony at the Arlington National Cemetery on Sunday, where she was seated in the midst of Trump administration officials.

While Pelosi made small talk with Acosta, she was completely frozen out by Nielsen, according to cameras focused on the two. Each time Pelosi tilted her head towards Nielsen, Nielsen looked the other way. That lasted throughout the ceremony of about 40 minutes.

This seating at this morning’s Veterans Day ceremony at Arlington couldn’t be any more awkward. Nielsen completely icing out Pelosi. Acting AG Matthew Whitaker in the back. Camera tightly focused on the trio for awhile. pic.twitter.com/TFUy7gtR1T

As for what may have caused the bad blood? Five months ago, Pelosi called on Nielsen to resign over the detention of migrant children. Pelosi tweeted on June 18:

“.@SecNielsen must resign. This is not an immigration issue, it is a humanitarian issue. Children are being used by the Trump Admin to create leverage, with a goal of passing Trump’s anti-immigrant agenda. I struggle to think of anything more barbaric. #FamiliesBelongTogether.”

.@SecNielsen must resign. This is not an immigration issue, it is a humanitarian issue. Children are being used by the Trump Admin to create leverage, with a goal of passing Trump’s anti-immigrant agenda. I struggle to think of anything more barbaric. #FamiliesBelongTogether

Pelosi also attacked Whitaker on Friday, telling CBS’s Face the Nation that the president’s appointment of him did “violence to the Constitution” and that he should have have been appointed.

“He should recuse himself for any review of the investigation because of statements he has made already in the public domain,” she said in a preview of the interview.

“There is bipartisan editorializing about this that he should have never been appointed and it does violence to the Constitution and the vision of our founders to appoint  such a person in such a manner to be the chief legal officer in our country,” she added.

Not surprisingly, Pelosi and Whitaker did not exchange any words either.

Pelosi is battling to become the leader of the House once again, despite challenges from within her own party. Almost 60 Democrat candidates  said they would not vote for her for Speaker. The list of those who won election and oppose her speakership has now whittled down to about two dozen.

Those Democrats are calling for “new leadership,” and a desire to move the country “forward.”

“I am looking for someone who will return us to regular order – in procedure, and with legislation,” Rep. Bill Pascrell (D-NJ) said in a statement to NBC. “The institution is not working. Chairmen must be given their power back. … It’s time to turn the corner.”

Rep. Conor Lamb (D-PA) told the Pittsburg Post-Gazette in January: “I think we need new leadership on both sides.”

“We need new leadership in Washington, on both sides of the aisle, and at every level, from first-term members to Congressional leadership, and for this reason, under no circumstances would I vote for Nancy Pelosi to again be Speaker of the House,” Abigail Spanberger (D-VA), who defeated Rep. Dave Brat (R-VA), said in a statement to NBC News.

“I won’t be supporting Nancy Pelosi…. I want new leadership to set up and move this country forward,” Jason Crow (D-CO) told the Denver Post in July.