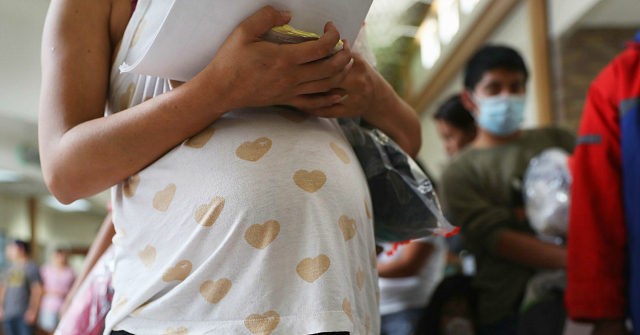 President Joe Biden’s deputies are rewriting the “public charge” regulations to let very poor migrants get both welfare and citizenship, and also to let Wall Street get more low-wage workers and welfare-funded consumers.

“This administration thinks that it’s okay for taxpayers to have to [economically] support any legal immigrant,” said Jessica Vaughan, the director of policy studies at the Center for Immigration Studies. The administration’s progressives believe “immigration is a humanitarian and a social assistance program — the priority is ‘What can we do for immigrants?’ not ‘How does immigration help our country?’”

The public charge rule was mandated by Congress to help deny residency and citizenship to legal and illegal migrants who cannot work enough to stay out of poverty. The resulting regulation was adapted to exclude migrants who rely on government-delivered welfare and other forms of taxpayer charity, which was then described as being a “public charge.”

But the public charge regulation was rarely enforced on migrants and their U.S. sponsors. So President Donald Trump’s deputies issued a regulation that instructed immigration officers on how to decide when particular migrants were dependent on the government’s increasing variety of aid and welfare programs.

Biden’s deputies at the Department of Homeland Security (DHS) quickly blocked the Trump rule. The replacement rule will help the officials provide green cards and citizenship to the huge inflow of poor illegal and legal migrants, including to the growing number of global migrants who are too uneducated, old, or ill to support themselves.

“Under this [new] proposed rule, we will return to the historical understanding of the term ‘public charge’ and [migrant] individuals will not be penalized for choosing to access the [taxpayer-funded] health benefits and other supplemental government services available to them,” Alejandro Mayorkas, the pro-migration chief of homeland security said February 17.

The new rule cannot eliminate Congress’s Public Charge law. So it creates many exceptions that essentially make the law meaningless.

For example, the draft regulation exempts many welfare programs from the definition of “public charge.”

DHS proposes that it not consider noncash benefits such as food and nutrition assistance programs including the Supplemental Nutrition Assistance Program (SNAP), the Children’s Health Insurance Program, most Medicaid benefits (except for long-term institutionalization at government expense), housing benefits, and transportation vouchers. DHS would also not consider disaster assistance received under the Stafford Act; pandemic assistance; benefits received via a tax credit or deduction; or Social Security, government pensions, or other earned benefits.

The draft regulation also exempts many categories of migrants from the public charge rule:

By law, many categories of noncitizens are exempt from the public charge ground of inadmissibility and would not be subject to the proposed rule. Some of these categories are refugees, asylees, noncitizens applying for or re-registering for temporary protected status (TPS), special immigration juveniles, T and U nonimmigrants, and self-petitioners under the Violence Against Women Act (VAWA).

GOP legislators in Congress, and elected officials in the states, may try to stop the Mayorkas rules by filing a lawsuit.

These easy-migration rules are a huge subsidy for business and Wall Street, Vaughan added:

Business will no longer have to worry about whether the wages they’re offering [to migrant workers] are enough to support an immigrant. The expectation is that taxpayers will cover the difference between the [company’s] low wage and the [workers] ability to survive …. so business can now get away with keeping wags low.

The lax rules also deliver more taxpayer-funded consumers to retailers and other vendors, she said. “It’s like printing money [for companies]… this is a prop and subsidy” for retailers, she said.

In January 2020, Breitbart reported on a lawsuit by companies against Trump’s update of the public charge rule. The investors’ lawsuit complained that:

Because [green-card applicants] will receive fewer public benefits under the Rule, they will cut back their consumption of goods and services, depressing demand throughout the economy …

The New American Economy Research Fund calculates that, on top of the $48 billion in income that is earned by individuals who will be affected by the Rule—and that will likely be removed from the U.S. economy—the Rule will cause an indirect economic loss of more than $33.9 billion … Indeed, the Fiscal Policy Institute has estimated that the decrease in SNAP and Medicaid enrollment under the Rule could, by itself, lead to economic ripple effects of anywhere between $14.5 and $33.8 billion, with between approximately 100,000 and 230,000 jobs lost … Health centers alone would be forced to drop as many as 6,100 full-time medical staff.

The Trump rule would have denied companies the ability to import replacement workers, the lawsuit complained:

American businesses depend upon an efficient immigration system to ensure that they have access to the talent that they need to grow and succeed … The Rule, however, would restrict American businesses’ ability to hire foreign-born workers, because, under the Rule, many skilled workers who would otherwise have been eligible for permanent residency would now be barred from receiving it.

the talent pool— of both citizens and noncitizens—available to American employers is likely to be drastically reduced, with far-reaching consequences for American competitiveness

The economic strategy was outlined on January 21 by Treasury Secretary Janet Yellon in a speech to the “Virtual Davos Agenda” which was organized by the globalist World Economic Forum.

The administration’s economic policy is a “modern supply side approach” that boosts economic growth with more workers, productivity gains, and tax reforms, she said:

My thanks to Klaus [Schwab] and to the World Economic Forum for hosting me.

Labor supply has been a concern in the United States even before the pandemic, in part due to an aging population and in part due to a labor force participation rate that has trended downward over the past 20 years. Now COVID and declining immigration have further reduced the workforce …

A second focus of the Biden agenda is to enhance productivity. Over the last decade, U.S. labor productivity growth averaged a mere 1.1 percent—roughly half that during the previous fifty years.  This has contributed to slow growth in wages and compensation, with especially slow historical gains for workers at the bottom of the wage distribution.

Many of Biden’s deputies — including his chief of staff, Ron Klain — are entwined with the coastal investors who want more imported cheap workers, high-occupancy renters, and government-aided consumers.

But Biden and some of his East Coast deputies — such as his appointees at the National Economic Council — seem to want a high-wage, high-tech economy.

In a January 22 press event, Brian Deese, who chairs the National Economic Council at the White House, stressed policies that would help unemployed Americans — not migrants — get into the workforce. Government-funded childcare “would be a big benefit to the labor market by allowing more people to work as productively as they — as they choose to,” Deese said. He continued:

The typical people who are working and thinking about their household budgets, for many of them, they’ve never seen a labor market that offers as many job opportunities as they have right now … What we’ve seen over the course of 2021, is that as that — as that tax cut was delivered to families, we actually saw labor force participation and the employment-to-population ratio increase, meaning that we saw more people get into the workforce.

However, Deese’s effort to get more Americans into work is undermined by Mayorkas’s regulatory effort to extract more migrants from poor countries. “The 2019 public charge rule was not consistent with our nation’s values,” said Mayorkas, a Cuban immigrant who insists that the United States must be a “nation of immigrants.”

Migration moves money, and since at least 1990, the federal government has tried to extract people from poor countries so they can serve U.S. investors as cheap workers, government-aided consumers, and high-density renters in the U.S. economy.

That economic strategy has no stopping point, and it is harmful to ordinary Americans because it cuts their career opportunities and their wages while it also raises their housing costs.

The economic strategy also kills many migrants, separates families, and damages the economies of the home countries.

Unsurprisingly, a wide variety of little-publicized polls do show deep and broad opposition to labor migration and the inflow of temporary contract workers into jobs sought by young U.S. graduates.

The opposition is growing, anti-establishment, multiracial, cross-sex, non-racist, class-based, bipartisan, rational, persistent, and recognizes the solidarity that Americans owe to each other.

What kind of drugs are they using in #Louisville, Kentucky? 😳 #WTF pic.twitter.com/JtPWXdiPGy