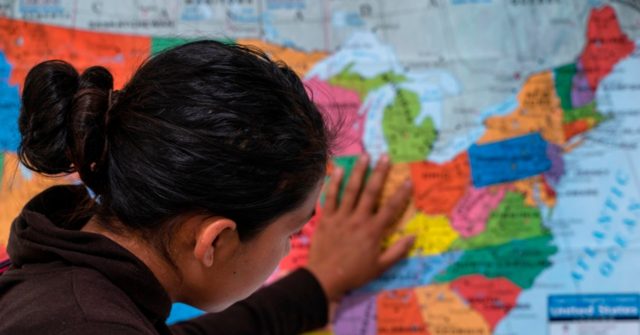 The Department of Homeland Security has put hundreds of thousands of Central American migrants on a fast-track to jobs and a slow-track to deportation.

The revelation was hidden in a brief statement by acting DHS secretary Kevin McAleenan, who told the Senate on May 23 hearing that 100 percent of migrants carrying children are released, some without asking for asylum, and are allowed to get work permits as soon as 30 days.

The DHS is releasing the migrants on the fast-track process “because they do not have the space” to detain migrants long enough to start the deportation process, said Andrew Arthur, a former immigration judge who works at the Center for Immigration Studies, a Washington, DC-based research. Congress will not fund shelters to hold more than 2,500 migrants with children, so it is allowing the border agencies to be overwhelmed by the rush of migrants.

The slow-track deportation process allows migrants to delay filing their likely asylum request — and so it delays the eventual rejection of the asylum claim, which is needed prior to deportation. “Rather than potential starting their asylum process while in custody [at the border], they are not going to take pleadings until they are in [subsequent] removal proceedings,” said Arthur. In contrast, the regular process allows migrants to be deported in roughly 40 days if border officials can quickly record and process asylum claims, starting with a “Credible Fear” interview.

Meanwhile, the fast-track job process allows migrants to get work permits as quickly as 30 days after crossing the border.

The fast-track/slow-track process means that employers quickly get an extra supply of tough, compliant, low-wage workers just as labor shortages are forcing companies to boost pay for Americans. The extra labor supply also reduces employers’ incentive to hire the population 12 million unemployed or underemployed Americans, some of whom are sidelined by disability, underinvestment in rural areas, or drugs.

PORTMAN: So, what percent of those families who come up to the border and, again, approach your officer, ask for asylum, are being released into the community within days?

MCALEENAN: Yeah, and they’re not necessarily asking for asylum. They – they don’t – they don’t have to. They can go into an immigration proceeding and not have to present that case for potentially years.

PORTMAN: And during that time period, can those individuals work?

MCALEENAN: Yes, by and large, although we’re–we’re looking at–at tightening the–the rules so that there is not an opportunity to take advantage of the system.

PORTMAN: So, they have a work permit. My understanding is they don’t get the work permit immediately but after a certain period of time. Is it six weeks?

McAleenan suggested that the border agencies will try to delay the award of work permits to migrants. That task, however, requires getting more migrants back into the regular bureaucratic process.

The regular process quickly assigns migrants in the deportation process. But most migrants counter by asking for asylum. In response, the ICE agents at short-term shelters near the border conduct a “Credible Fear” interview to gauge the migrants’ asylum claims. Almost 9 out of 10 migrants pass the low-bar interview (under rules set by Congress) and are then given a “Notification to Appear” at a hearing before an immigration judge. Next, migrants cite a separate law which allows them to apply for a work permit if they have not had their hearing in 150 days.

But DHS officials are not processing the migrants via the conventional process. Instead, they are “paroling” the migrants with children into the United States even before they undergo a Credible Fear interview and get a NTA. Once released via parole, a different law allows migrants to quickly apply for a work permit. McAleenan did not say how many migrants apply for the work permits, or how long the work permits last.

But agency data shows a huge volume of migrants getting work permits.

DHS officials have refused to tell Breitbart News how long the work permits last, are hiding the number of migrants getting new work or extended work permits. But McAleenen’s comments suggest that the parole number is rising fast in 2019.

Nancy Pelosi is promising to raise wages via gov’t socialism, but Trump’s “Hire American” immigration/labor-supply policy is nudging wages up by 3-4 percent a year. Yes, politicians competing over rival wage-raising policies would be a great thing. https://t.co/ThXHOAr2NZ

The overall award of work-permits is huge — and it is roughly equal to one extra migrant worker for every 10 Americans who joined the labor force in 2017 and 2018.

The rush of migrants has spiked in 2019 because the cartels, the migrants, the border agencies and the voters know that Congress is refusing to block the catch-and-release loopholes which are delivering hundreds of thousands of cheap workers to their political allies and their donors. The migration may reach 800,000 in the 12 months up to October. That number includes at least 400,000 extra workers, and at least 200,000 children for placement in K-12 schools used the children of America’s blue-collar communities.

More than 12 million Americans remain unemployed, underemployed, or out of the labor force but wanting a job. Tight labor market still has some slack. https://t.co/gpDbIUcGjE

The underlying problem is that California judges set a 20-day “Flores” limit on the detention of migrants who bring their children, said Arthur. This means each wave of migrants with children can easily overcome the border rules, ensuring they get released into the U.S. job market. Arthur said:

The regulation to replace the Flores decision is likely to be published soon, he said, adding “needless to say, this is the key to the kingdom.”

This year’s inflow of up to one million illegal migrants from Central American is only a small slice of the immigration economy.

This policy of flooding the market with cheap foreign white-collar graduates and blue-collar labor shifts also enormous wealth from young employees towards older investors even as it also widens wealth gaps, reduces high-tech investment, increases state and local tax burdens, and hurts children’s schools and college educations. It also pushes Americans away from high-tech careers and sidelines millions of marginalized  Americans, including many who are now struggling with fentanyl addictions. The labor policy also moves business investment and wealth from the heartland to the coastal cities, explodes rents and housing costs, shrivels real estate values in the Midwest and rewards investors for creating low tech, labor-intensive workplaces.

Acting DHS Sec. Kevin McAleenan defends his agency’s policy of upgrading — but not extending — the border walls. Also, his list of priorities pointedly does not include the enforcement of the laws barring wage-cutting illegals from US workplaces. https://t.co/j0jsHNlaFM