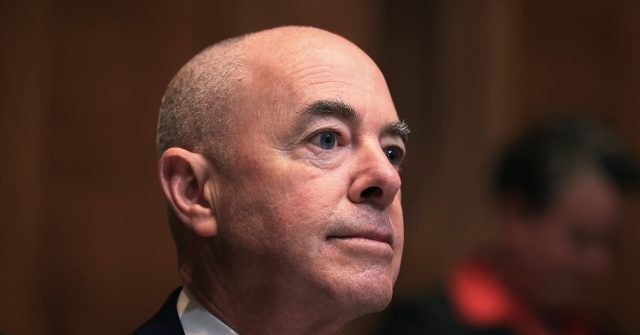 U.S. Department of Homeland Security (DHS) Secretary Alejandro Mayorkas will travel to Mexico later this month after media-quoted White House sources suggested that Vice President Kamala Harris might have bungled her trip to the region.

Mayorkas will visit Mexico on June 14 and 15 “to meet with counterparts in the Government of Mexico on areas of mutual interest. This will be Secretary Mayorkas’s first international trip since becoming confirmed in February,” DHS reportedly announced in a press release.

The announcement came after Democrat-allied CNN learned from unnamed administration officials that the White House was concerned that Harris’s reluctance to say whether she will visit the southern border might overshadow her trip and render it a failure.

The vice president’s trip to Guatemala and Mexico was supposed to help get at what she says are the “root causes” of the current crisis on the U.S.-Mexico border. Instead, it may have made matters worse.

First, this root-causes business is horse crap. The spinners within the Biden administration concocted that line to skirt the embarrassing fact that Harris is tasked with solving the border crisis but can’t find her way to the border, and that, despite this administration’s rhetoric, not all problems south of the border have their roots in the anti-immigrant policies of the Trump administration.

Harris and her team had claimed that President Joe Biden “mischaracterized” her mission when he assigned her the high-profile task of leading the White House response to the border crisis and addressing the “root causes” of migration in Central America, CNN reported early this month.

The VP believes her role is only to focus on the so-called “root causes” problem, not the situation at the border.

CNN learned from unnamed officials early this month that Harris and her staffers believe that being affiliated with the border crisis could be politically harmful to her chances of becoming president.

In an apparent attempt at damage control, the White House appears to have changed their tune and gotten on board with Harris’s position.

On Tuesday, Jen Psaki, the White House press secretary, told reporters about the VP’s trip, “What her focus has been, what the assignment is specifically, is to work with leaders in the Northern Triangle. She’s on a trip doing exactly that, exactly what the President asked her to do.”

Insisting that her mission was to discuss the “root causes,” not manage the border crisis, Harris deemed her journey, her first foreign trip as VP, a “success.”

According to CNN, the White House cast doubt on the success of Harris’s trip given her exchange with NBC News about visiting the border.

“At some point, you know, we are going to the border. We’ve been to the border [in the past],” Harris told NBC’s Lester Holt.

“You haven’t been to the border,” Holt retorted, prompting Harris to say with a laugh, “And I haven’t been to Europe. And I mean, I don’t understand the point that you’re making … I’m not discounting the importance of the border.”

Harris has resisted a bipartisan push for her to visit the border, again in a reported attempt to keep a distance from the crisis.

Republican lawmakers accused the VP of not taking seriously the surge of predominantly Central American migrants from the Northern Triangle countries of Guatemala, Honduras, and El Salvador.

Progressive Democrats like Reps. Alexandria Ocasio Cortez (NY) and Rashida Tlaib (MI) also blasted Harris for urging migrants seeking to make the dangerous trip to the United States not to come because they “will be turned back,” during a press conference in Guatemala.