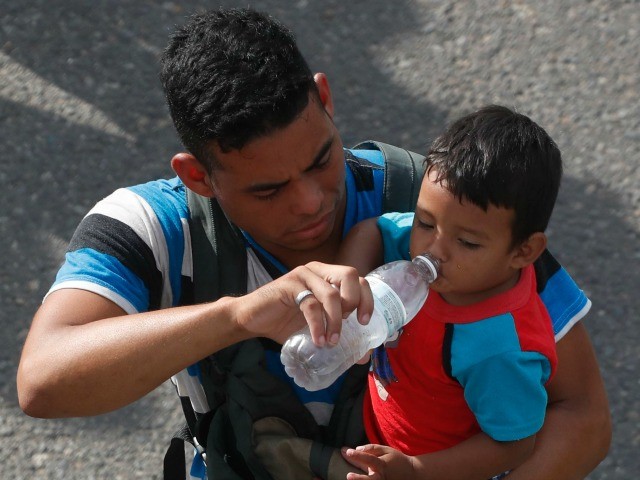 Almost 400 migrants carried other people’s children or youths, or lied about their adult age, to get over the border in the nine months prior to September 30, according to the Department of Homeland Security.

The data about large-scale fakery corroborates the few media reports which show how migrants are renting other people’s children to trigger loopholes which allow the adults to get over the border and be released into the U.S. job market. The data also shows rational willingness of poor migrants to get decent jobs in the United States by lying to wealthy, foreign Americans on the U.S. border.

Few American media outlets are willing to admit the migrants’ careful manipulation of American law, or the taxpayers’ cost and the wage-cutting impact of the fraudulent migrant influx. Instead, most establishment media prefer to portray the migrants as guileless and grateful recipients of charity from selfless progressives.

“In response to the misreporting from multiple outlets, I wanted to highlight the rampant fraud taking place at our Southern border,” said a November 27 statement from DHS spokeswoman Katie Waldman. She continued:

Aliens know that if they bring ANY minor with them they will be apprehended by Border Patrol and released into the interior of the United States. This is a direct result of the Clinton-era Flores Settlement decree that has created a massive loophole which allows alien family units to illegally cross the border and enter the United States after a short detention [of 20 days].

This well-known loophole acts a magnet for family units and entices smugglers to use children as a way to gain access to the United States by posing a family unit. Word has gotten out. Over the last two years, we have seen a 110 percent increase in male adults showing up at the border with minors. Further from April 19, 2018 to September 30, 2018, 507 aliens were encountered as a family unit and were separated as they were not a legitimate family unit.

Waldman’s data said the 507 aliens were comprised of two groups:

The Rio Grande Valley had the highest number of reported fraudulent cases, at 170 cases, Waldman reported.

Waldman added a line to remind pro-migrant journalists that her data about a subset of migrants is not a blanket description of all migrants’ border-crossing tactics.

This data does not show nor does DHS assert that all minors apprehended as part of a family unit are illegitimate, but it does indicate that there is a significant problem that provides DHS the needed authority to protect the best interests and welfare of all children.

A report in the Washington Post cited two examples of child-related fraud by poor migrants:

[Gilda] López, a single mother, left each morning at dawn to clean houses and came home 12 hours later. A month of this would bring in $60. In her home, there was rarely enough food.

When [Denys Adelmo] Mejia came asking for a child, López was willing to let her daughter go.

“I don’t have any support here,” she said, tears in her eyes. “And so I made the decision that my girl should leave.”

In September, Breitbart News reported that hundreds of children and youths detained during the brief “zero tolerance” policy are being left behind in the United States:

The ACLU has admitted that migrant parents in the “family separation” furor are deliberately leaving at least 114 children in the United States, says a court filing by the federal government.

The acknowledged abandonment of the 114 children and youths — plus the de-facto abandonment of up to 232 others — undermines the progressives’ media-magnified claim that President Donald Trump maliciously separated victimized families as they fled from crime into the safety of the United States.

Instead, the migrants’ decisions to leave 114 children behind highlights the migrants’ rational and reasonable plan to use the border loopholes created by progressives to get themselves and their children — either separately or together — to the United States’ job opportunities, free education, peaceful streets, and anti-poverty programs.

ACLU admits the deported migrants they are helping are separating their own families by choosing to leave youths and children in the United States, even as estb. media broadcasts progressives’ claim that Trump maliciously split victimized migrant families. https://t.co/3PZc8bcw0z

That flood of outside labor spikes profits and Wall Street values by cutting salaries for manual and skilled labor offered by blue-collar and white-collar employees. The policy also drives up real estate prices, widens wealth gaps, reduces high tech investment, increases state and local tax burdens, hurts kids’ schools and college education, pushes Americans away from high tech careers, and sidelines at least five million marginalized Americans and their families, including many who are now struggling with opioid addictions.