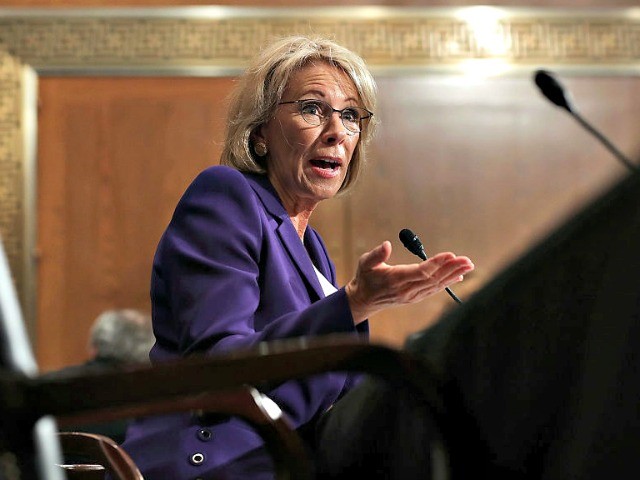 U.S. Education Secretary Betsy DeVos has signed onto a declaration by education ministers of the G-20 countries that calls for putting education “at the center of the global agenda,” an action that has led a national grassroots organization of parents to call for her dismissal.

The declaration, which was produced at this first gathering of the “Education Working Group” of the G-20 governments and dictatorships, was titled “Building Consensus for Fair and Sustainable Development,” and calls for globalization of education, inclusiveness, social and emotional learning, and increasing data collection on students throughout their educations and well into their careers.

In her prepared remarks to the G-20 education ministers in Argentina, DeVos brought forward her goal for workforce development, or government management of the workforce, which the Trump administration has recently stressed in its proposal to merge the U.S. Departments of Education and Labor.

“Indeed, education and the economy are indivisible, especially given the interconnectedness of the world today,” DeVos said, emphasizing that while each child is “an individual,” governments should approach education by acknowledging “the realities of today’s economy, with an eye toward tomorrow’s opportunities.”

“So, students must be prepared to anticipate and adapt,” she said. “They need to acquire and master broadly transferrable and versatile educational competencies like critical thinking, collaboration, communication, creativity and cultural intelligence.”

The secretary also stressed her signature issues of school choice and vocational apprenticeships in her remarks.

The declaration specifically states the G-20 education ministers are “in line with the United Nations 2030 Agenda,” and continues:

It is important that education keeps pace with societal and technological innovations such as Artificial Intelligence, Big Data and Internet of Things. We recognise that changes in the economy and labour markets have profound implications for education and training systems even though many of them remain unpredictable. Acknowledging the autonomy and diversity of national, regional and local governments and contexts, emerging knowledge and 21st century skills should be considered in curriculum development and pedagogical approaches at all levels of education. The curricula should be highly responsive to evidence-based practices, future employment trends, and design in collaboration with key stakeholders.

The education ministers note that while “increased investments in education above certain thresholds do not necessarily entail better outcomes,” the way to achieve their goals is through “strengthening governance, management, monitoring and accountability,” methods that involve greater government control of education.

We commit to facilitating the internationalisation of education, including the cross-border recognition of qualifications and skills, and the mobility of students, teachers, academic and non-academic staff, trainers and researchers, with a view to improving quality education and research, and in accordance with the respective national laws, rules and policies. We support the promotion of exchange and scholarships programmes among G20 members and other countries, in particular with developing countries around the globe.

“Understanding and appreciating other parts of the world, different religions, cultures, languages and points of view are essential elements of global and cultural competence,” the education leaders say.

In addition to urging “digital literacy,” the education ministers say they will “foster the inclusion of non-cognitive skills such as socio-emotional skills across the curriculum [ SEL].”

Following the summit, DeVos told reporters the declaration is “very consistent with all of the themes that we’ve been talking about,” reported Education Week.

“Ultimately, the meeting resulted in a declaration that calls for putting education ‘at the center of the global agenda,’” the report added. “It says the G-20 nations will work to ‘ensure inclusive and equitable quality education and promote lifelong learning opportunities for all.’”

DeVos said the United States can learn from other G-20 countries, who are making more progress in the area of developing the 21st Century skills.

U.S. Parents Involved in Education (USPIE) – an organization of parents, taxpayers, and educators who are committed to ending the U.S. Department of Education, has called for the dismissal of DeVos.

On Tuesday, USPIE sent a letter to President Donald Trump in which the group called for the elimination of the U.S. Department of Education, per the Constitution, and the end to federal education programs.

In its letter, USPIE reminded Trump of his campaign promises to eliminate Common Core and begin dismantling of the federal education department.

“Since her appointment, Secretary DeVos has used the hammer of the Federal government to broaden its authority and disregard the rights of states and parents,” USPIE wrote, adding:

“We do not believe these actions are consistent with your ‘America First’ philosophy nor your campaign promises that generated so much enthusiasm,” the grassroots education group told Trump. “Given these concerns, we call for the immediate dismissal of Secretary DeVos and for the appointment of an American education leader who will prioritize the fulfillment of your campaign promises.”