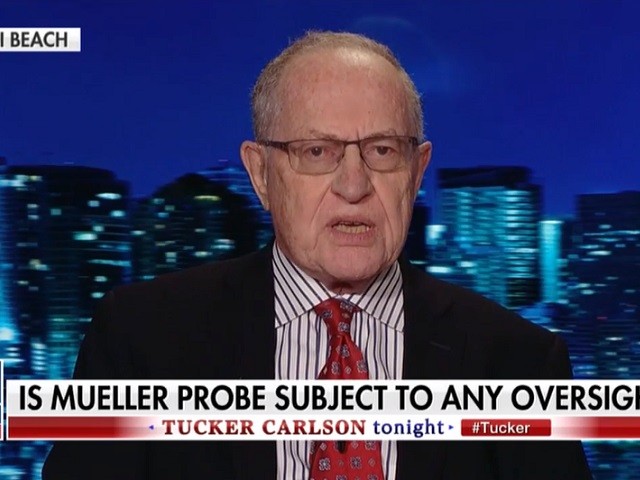 Dershowitz called that effort an “attempted coup d’état” and a “grievous offense against the Constitution.”

“Well, if that’s true, it is clearly an attempted coup d’état,” Dershowitz said. “Now relating to what your last guest said, let’s take the worst case scenario. Let’s assume the president of the United States was in bed with the Russians, committed treason and obstruction of justice. The 25th Amendment simply is irrelevant to that. That’s why you have an impeachment provision. The 25th Amendment is about Woodrow Wilson having a stroke. It’s about a president being shot and not being able to perform his office. It’s not about the most fundamental disagreements. It’s not about impeachable offenses. Any Justice Department official who even mentioned the 25th Amendment in the context of President Trump has committed a grievous offense against the Constitution.”

“The framers of the 25th Amendment had in mind something very specific and trying to use the 25th Amendment to circumvent the impeachment provisions or to circumvent an election is a despicable act of unconstitutional power grabbing,” he continued. “And you were right when you said it reminds me of what happens in third-world countries. Look, these people may have been well-intentioned. They may have believed they were serving the interest of the United States, but you have to obey the law, and the law is the Constitution.”

“And the 25th Amendment is as clear as could be: incapacity, unable to perform in office,” Dershowitz added. “That’s what you need. That’s why you need two-thirds of the House and two-thirds of the Senate agreeing, and it has to be on the basis of a medical or psychological incapacity. Not on the basis of even the most extreme crimes, which there is no evidence. But even if they were, that would not be a basis for invoking the 25th Amendment. And I challenge any left-wing person to get on television and to defend the use of the 25th Amendment. I challenge any of my colleagues who are in the ‘get Trump at any cost’ camp to come on television and justify the use of the 25th Amendment other than for physical or psychiatric incapacity.”