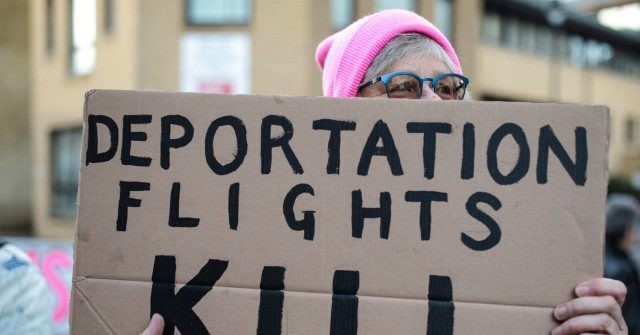 The Times has revealed several cases in the past year of deported criminal migrants returning to the UK and using EU and human rights laws to fight their removals.

In the report published on Sunday, the newspaper shared analysis of cases heard by the Upper Tribunal (Immigration and Asylum Chamber), including from those criminal migrants who used the Human Rights Act, EU laws on the right to family life, and claims of being a victim of modern slavery to stay in the country.

Many had returned in days or weeks to the United Kingdom via EU nation the Republic of Ireland. Both countries are part of the Common Travel Area where British and Irish citizens can move freely and there are relaxed border controls.

After serving a 15-month prison sentence for dealing drugs, Aldri Cepele was deported to Albania in 2018, at the cost of £18,000 to the British taxpayer. After his deportation, he married a Romanian woman then smuggled himself back into the country via Ireland. He is appealing his removal because his wife is an EU citizen. (EU citizens still have the right to freedom of movement in the UK until the end of the Brexit transition period on December 31st, 2020.)

“The prospect of the European Court of Justice and the European Commission continuing to issue orders to the UK and endless legal wrangling truly means we face a nightmare on Brexit street unless we break free from their clutches at the 11th hour.” https://t.co/BLxnBk4jtS

Other cases include two deported drug dealers, from Jamaica and Kenya, who returned and are fighting their second deportation on human rights grounds. Another deported drug smuggler — who has 11 convictions alone in the UK, including assault — is fighting his second removal on the grounds that he will be persecuted in his native Uganda for being gay.

While another Albanian criminal is fighting her removal because she has family in the UK. A Dutch burglar won his right to stay in the UK because he grew up in Britain and claims he has no memories of the Netherlands.

The UK is set to take back control of its immigration laws in January 2021. While the government has pledged to speed up the deportation of criminal migrants, there are reportedly no plans to withdraw from the European Convention on Human Rights, which prohibits returning any migrant to a failed state, or where they at risk of torture or capital punishment. Further, the UK’s Human Rights Act enshrined the ECHR into British law.

The Human Rights Act has also been abused by convicted Islamist terrorists to avoid deportation, some of whom have used legal aid to fight their removal.

London Bridge killer Usman Khan was a convicted terrorist released from prison after judges changed his “public protection” sentence. Public protection sentences were scrapped by the Tories and deemed unlawful in a European court ruling. https://t.co/p5wfe2BhUK