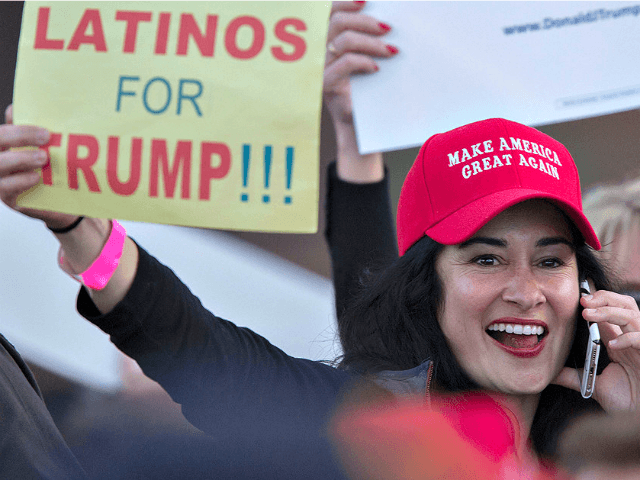 Democrats are reportedly extremely worried that President Donald Trump’s support among Latinos is not falling ahead of the 2020 presidential election.

Even if the methodology of a PBS poll that had Trump’s approval rating with Hispanics at 50% was faulty and an outlier, Trump’s support among Latinos has remained steady even as the English-language establishment media and the Spanish-language press have spent two years demonizing Trump as an anti-Hispanic racist.

According to a Tuesday Politico report, Trump’s “dire rhetoric about immigration seems to have done little damage to his modest — but not insignificant — support among Hispanics.” The outlet pointed out that “Trump’s support among Latinos and Hispanics in three other polls taken in January — 18 percent in a ABC/Washington Post survey, 30 percent in a The Economist/YouGov one, and 35 percent in poll from Quinnipiac University — produced an average of 27.6 percent,” which “roughly matches the 29 percent of the Hispanic vote Trump carried in the 2016 presidential election, an improvement of two percentage points over Mitt Romney’s performance with those voters four years earlier.”

The recent government shutdown over the border wall also did not harm Trump with Hispanics:

POLITICO/Morning Consult polling over the past two months also suggests the border wall-fueled shutdown had little effect on Trump’s approval rating among Hispanic voters. In the three weeks leading up to the shutdown, Trump’s approval rating among Hispanics stood at 30 percent. That ticked down to 28 percent in the three polls so far in January — statistically unchanged from the [pre-shutdown] surveys.

Fernand Amandi, “a Miami-based Democratic pollster and president of the consulting firm Bendixen and Amandi,” believes economic and cultural reasons are both responsible for keeping Trump’s numbers with Latinos steady.

He told Politico that the economy—and the record-low unemployment rate for Latinos—is “single-handedly the most important issue” for Hispanics.

But Trump’s strong stance on religious liberty and abortion have also helped him among “socially conservative Hispanics, many of whom are Catholic.”

In addition, Amandi conceded that “there’s also a reactionary segment of the Hispanic electorate who is aligned with some of the Trump administration’s thinking on immigration and on some social issues.”

As Breitbart News reported, former Univision anchor Maria Salinas, whom the New York Times once described as the “voice of Hispanic America,” revealed this month that she was saddened that many Latinos were “buying some of these arguments against undocumented immigrants” that Trump has been making.

“And it’s very sad to see that our own people, who are immigrants themselves, are attacking these immigrants that are trying to come in, knowing themselves how difficult the situation is in a lot of these Latin American countries,” Salinas said on CNN. “And, you know, they’re buying it, and some people, just like some other Trump supporters, are saying, well, you know, so what if he tells lies, as long as we have lower unemployment among the Latino community.”