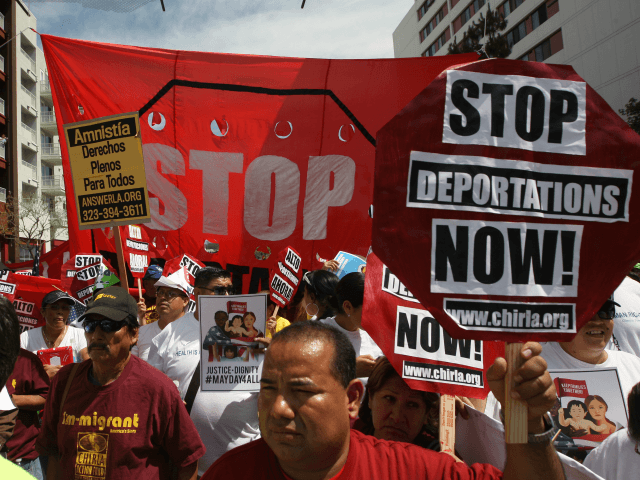 Congressional talks over border security and the wall have stalled because Democrats are trying to sharply limit the deportation of economic migrants.

President Donald Trump posted a tweet on Sunday about the partisan divide over deportation rules which have split the 17 legislators drafting the 2019 budget for the Department of Homeland Security:

I don’t think the Dems on the Border Committee are being allowed by their leaders to make a deal. They are offering very little money for the desperately needed Border Wall & now, out of the blue, want a cap on convicted violent felons to be held in detention!

The “cap on convicted violent felons to be held in detention” likely refers to the Democrats’ push to shrink the number of detention spaces needed by the U.S. Immigration and Customs Enforcement (ICE) agency to hold migrants during the legal deportation process.

Democrats were trying to limit the number of detention beds that the U.S. Immigration and Customs Enforcement agency would have access to. Democrats want to cap detention beds as a way to limit aggressive detention activities by ICE.

The cap on detention beds would not “Abolish ICE,” as sought by some Democratic legislators, but would shackle ICE to the establishment’s pro-migration policies.

If the Democrats can shrink the number of detention beds, then enforcement officials would be unable to deport many lower-priority economic migrants. That would create a hidden amnesty for economic migrants who do not commit violent crimes.

Officials normally put a higher priority on deporting violent criminals illegals, and illegals caught driving while drunk. But many of the criminal migrants are aided by lawyers eager to slow deportations.

Also, without enough beds, border agencies would be forced to catch-and-release the wave of Central American migrants seeking jobs in Democrat-run cities.

Currently, officials do not have the enforcement agents and bed spaces needed to catch, detain, and deport migrants crossing the border, or even the one million migrants already ordered home by judges.

There are at least 11 million migrants in the United States, including roughly 8 million who are working. That illegal population is a huge benefit to business because the migrants force down wages, boost rental costs, and raise consumer sales. The population is also a huge problem for the many millions of Americans who earn less at their jobs and pay more for apartments.

The disagreement over deportations comes as the Gallup polling company reported that 5 million people to the south of Texas are considering whether to migrate this year into the United States:

Pro-migration activists pretend migrants are helpless recipients of progressive charity. But migrants are rational & will go to US if Dems & biz force open the border. So Gallup warns that 5 million people are calculating the gains & risks for a 2019 move: https://t.co/nGUr3Q0dXk

Budget talks are taking place behind closed doors, but each side is leaking claims about the disagreements. The Wall Street Journal reported:

A Democratic aide said that if Democrats agree to a number above that, they will want concessions on their priorities, such as the number of detention beds and asylum rules.

Lawmakers haven’t agreed on the number of detention beds for Immigration and Customs Enforcement. Democrats are pushing for a lower number, believing that it would limit how many people that ICE could detain, while Republicans want a higher number, saying it is for humanitarian reasons to process asylum claims.

“I think the talks are stalled right now,” said GOP Sen. Richard Shelby, who is a member of the 17-person panel which is supposed to draft a 2019 spending plan for the Department of Homeland Security (DHS). “I’m not confident we’re going to get there.” The plan was supposed to be completed by February 11, before a February 15 vote.

Democrats are trying to expand the catch-and-release rules which funnel wage-cutting Central Americans through Mexico into Democratic-run cities & blue-collar workplaces. This migrant flow is recognized as cartel-run labor trafficking until it reaches U.S. https://t.co/C1qJN90zuB