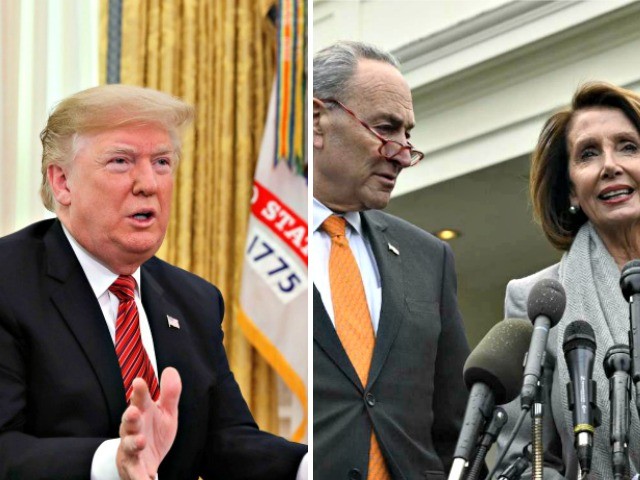 Democrats have grabbed several concessions from President Donald Trump in the border wall talks, but continue to claim that economic migrants from Central America should be welcomed as refugees who deserve humanitarian aid from taxpayers.

The Trump concessions include a quiet Christmas request for $2.5 billion instead of the current request $5.7 billion for wall construction in 2019, Trump’s decision to drop plans for a concrete wall, and Trump’s offer to restart former President Barack Obama’s “Central American Minors” program that was intended to shuttle youths and children from Central America to their illegal migrant parents living in the United States.

The Trump concessions were acknowledged January 7 by Vice President Mike Pence as he briefed reporters on the progress of negotiations. But Pence complained that the Democrats had not offered any concessions of their own:

The question that I have is: When are the Democrats going to start negotiating?  We made the position of the President very clear, not only in terms of what our proposal is; we’ve integrated some of their proposals …  We stand ready to sit down with the Democratic leadership.

The President went to the negotiating table in good faith. He started with a far smaller [wall funding] number than the original $25 billion and was willing to negotiate further. The [Democratic] response was crickets. At this point, Republicans need to stop negotiating with themselves and wait for the Democrats to come to the table with a offer.

The Democrats’ refusal to negotiate was spotlighted by the failure of January 9 talks between Trump and top Democrats.

Just left a meeting with Chuck and Nancy, a total waste of time. I asked what is going to happen in 30 days if I quickly open things up, are you going to approve Border Security which includes a Wall or Steel Barrier? Nancy said, NO. I said bye-bye, nothing else works!

In their response to the President’s January 8 address to the nation, Democrats charged that Trump is motivated by malice and claimed the flow of wage-cutting economic migrants deserves a compassionate, welcoming response.

“Much of what we heard from President Trump during this senseless shutdown has been misinformation and even malice,” said House Speaker Nancy Pelosi. The migrants “are a humanitarian challenge, a challenge that President Trump’s own cruel and counter-productive policies have only deepened,” she said.

In his January 8 address to the nation, Trump described his decision to drop his proposed concrete wall as a concession to Democrats. “At the request of Democrats, it will be a steel barrier rather than a concrete wall,” he said.

In his January 7 briefing, Pence explained the short-lived compromise offer of a $2.5 billion wall request was immediately rejected by Democrats.

I can neither nor deny the numbers that have floated around about what was offered on the first day of the shutdown [before Christmas].  But I can assure you, it came from the President of the United States.  And Senator [Chuck] Schumer knows that.  They were provided with documentation of that, that day, to Senator [Mike] Leahy’s office and to Senator [Richard] Shelby’s office … after Christmas that we were informed there would not be a counteroffer.

We incorporated ideas that Democrat leaders and Democrat staff had brought to our attention over the course of meeting of principals and over the course of the staff meeting.  And we were able to clear with the President those things that the administration was prepared to support. We added those to our request.

Those changes included extra funding for technology to detect drugs in vehicles as they pass through the border, plus extra medical support for migrants arriving at the U.S. border. He said:

We have vetted $800 million to address enhanced medical support, transportation, and consumable supplies … we believe that increasing that by $631 million over the ’19 level would meet the need of providing the kind of non-intrusive technology to allow us to get at — and not just narcotics, but also, most especially, about human trafficking issues at the border.

The least recognized concession to the Democrats was the proposed restoration of Obama’s CAM program, which was quickly frozen in February 2017 by Trump’s deputies. Pence said:

Another proposal that was brought to us by the Democratic leadership and that, frankly, I’ve heard about in my meetings with leaders of Northern Triangle countries of Guatemala, El Salvador, and Honduras.  And that is, they made a request that we consider allowing children to apply for asylum at our embassy in those countries, as opposed to only being able to apply for asylum by making the long and dangerous journey north.

However, the restoration of the CAM program would not automatically ensure the delivery of any migrants to their illegal parents in the United States unless the Democrats also demanded a minimal number of transfers each year.

Pence coupled the CAM concession with Trump’s call for legal reforms which would allow the federal government to return younger migrants who lose their court appeals for asylum. He said:

The President and the Secretary of State and I met over that issue, and the President has endorsed that reform that obviously would require a statutory change, along with reallocation of State Department resources in the State Department appropriations bill, but it’s one that we’re prepared to support.  And we also believe that we should match that with one other statutory change that the Secretary just alluded to, which is unaccompanied children who apply for asylum, who, after due process, are determined not to be eligible for asylum … We cannot return them, even if their families request them to be — we cannot return them to their families in Honduras, El Salvador, or Guatemala.

The reciprocal reform, he said, would cut the economic incentive for the cartels to smuggle children and youths into the United States:

So we think — what the Secretary described, is that “pull-factor.”  We think that — by allowing children to apply for asylum in those countries [via the CAM program] and by making it clear that those that are not eligible for asylum will be returned to the countries, we think that we will take part of the incentive that human traffickers use to take thousands of dollars cash to take children on a long and dangerous journey, oftentimes facing physical and sexual abuse along the way north, to attempt to come into our country to take advantage of loopholes in our laws.

Since Trump’s deputies canceled the CAM program, they have also stepped up identity checks of illegals migrants who pay the cartels to deliver their children to shelters run by the Department of Health and Human Services. Democrats loudly oppose those changes and say migrant youths should be quickly delivered to illegal-migrant “sponsors” in the United States without any checks on their legal right to live in the United States.

In his talks with the media, Trump has also hinted at broader concessions, including a huge immigration bill that would provide business with more workers and Democrats with more future voters. In his January 19 exchange with reporters, Trump said:

I would love to do a big immigration bill where we really repair the situation. … Right now we have a problem, we have to take care of this and it’s quicker and easier to do this individually. But we would like to see real immigration reform in this country because we need it and it could be a beautiful thing. With all of the companies coming into our country … we have many car companies and other companies that are going in. Best job numbers … We have the best job numbers, we need people, we need great, qualified people. We want them to come in. So I think it’s a great time right now, because of this. … Everybody wants to see immigration reform. It’s just, it’s overdue. It’s always been very political. Maybe this [shutdown crisis] will turn out to be a blessing in disguise … We need strong borders and we need immigration reform, beyond that, we need immigration reform.

Any broader immigration reform would be a very risky step by Trump, partly because it would likely put an instant freeze on pay raises before the 2020 elections.

Currently, companies are raising wages for blue-collar workers because they have begun competing for employees in a tight labor market. That market is created by the combination of a growing economy and Trump’s “Hire American” policy of lower migration.

Wages for white-collar workers are growing slower, in part, because companies already have outsourced jobs to roughly 1.5 million non-immigrant visa workers throughout the United States.

“The Democrats are not negotiating at all,” said Rosemary Jenks of NumbersUSA. “They’re not at the table, and that is why we are in Day 19 of the shutdown. [For Democrats] this isn’t a negotiation — this is ‘We’re going to slap the face of the entire country and we don’t give a damn.’” she said.

The Democrats’ no-concessions policy is being aided by the establishment media, Jenks said. “Reporters are yelling questions to the president saying ‘How long as re you going to let the shutdown go on?’ When are they going to ask the Democrats to do that?”

But Democrast will not budge until they feel more pressure from supporters and voters, she said:

Until either the federal workers’ unions — which have a lot of sway — put more pressure on them, until the American people start getting in touch with Democratic politicians, I think the Democrats will refuse to move, despite the fact that what they are doing is against the interests of the American people and of America.

Nationwide, the bipartisan establishment’s economic policy of using legal migration to boost economic growth shifts wealth from young people towards older people by flooding the market with cheap white-collar and blue-collar foreign labor. That flood of outside labor spikes profits and Wall Street values by cutting salaries for manual and skilled labor of blue-collar and white-collar employees.

Immigration also steers investment and wealth away from towns in Heartland states because coastal investors can more easily hire and supervise the large immigrant populations who prefer to live in coastal cities. In turn, that investment flow drives up coastal real estate prices, pricing poor U.S. Latinos and blacks out of prosperous cities, such as Berkeley and Oakland.