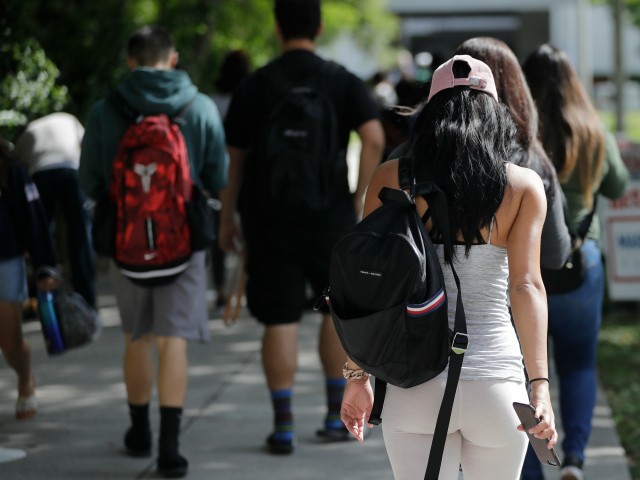 Democrat politicians and feminist activists are determined to keep the Obama-era policies that created “kangaroo courts” on college campuses and often denied due process to the mostly male students accused of sexual misconduct.

.@BetsyDeVosEd’s proposed #TitleIX rule will return us to a time when sexual assault survivors were ignored and felt like they had nowhere to turn. #HandsOffIX

Make your voice heard in fighting against this harmful proposal ➡️ https://t.co/9EyUDrndIT

Murray and Hasson met with feminist advocates to urge them to comment on the proposed rule.

“DeVos’s proposed rule will return us to a time when sexual assault survivors were ignored and felt they had nowhere to turn,” Murray said during the gathering, reported the Hill.

Hassan referred to the proposed rule as a “major step backward in the wrong direction” in handling sexual misconduct on college campuses.

“The Education Department is required to consider all comments from the public before making a final decision on these regulations, so I join Sen. Murray in saying that the best step that Secretary DeVos could take would be to rescind these proposals and let’s start anew,” Hassan said:

Murray said she and Hassan “are gonna fight [the rule] with everything [they] have.”

“We’re counting on the public to stand with us, behind us and in front of us,” she added.

In November, Education Secretary Betsy DeVos released the long-awaited proposed Title IX rule, calling for a “presumption of innocence throughout the grievance process,” “written notice of allegations and an equal opportunity to review all evidence collected.”

Additionally, with the new rule, both parties would have the right to cross-examination.

The proposed rule would also define sexual harassment consistent with the definition used in U.S. Supreme Court Title IX cases, i.e., “unwelcome conduct on the basis of sex that is so severe, pervasive, and objectively offensive that it effectively denies a person equal access to the school’s education program or activity”:

Politico observed Murray’s tweet to a link to a website a group claiming to be sexual abuse “survivors” created. The website, titled #HandsOffIX, instructs people how to submit comments opposing the Trump Education Department’s proposed plan for handling allegations of sexual misconduct on college campuses.

“Betsy DeVos and the Trump Administration have issued proposed rules on Title IX that would be harmful to students [sic] survivors and make campuses more dangerous,” the website states:

Politico reported, however, that a group of more than 200 professors and attorneys also released a statement Thursday in support of the proposed rule and urged members of Congress to “speak out in support of Constitutionally rooted due process rights on campus.”

Defense attorney Andrew Miltenberg, who has sat through hearings in more than 100 cases of campus sexual misconduct, told NJTV News that many schools are not capable of providing fair investigations that ensure due process for the accused students.

Miltenberg represented the Columbia University student who was accused of rape by Emma Sulkowicz, also known as “mattress girl.” Last year, the school reached a settlement with the student and released a statement of regret for his experience.

“These cases generally take the accuser’s words as 100 percent true,” he said. “So you’re starting the process with a presumption of guilt against the accused and that’s not the principle on which our country was founded.”

At Washington University in St. Louis, however, Provost Holden Thorp told the school’s newspaper, Student Life, the university plans to object vehemently to allowing the accused to cross-examine his accuser.

“That’s re-traumatizing the victim, and we are already trying to make the process less re-traumatizing even with what we have, and adding cross-examination would make it even harder for us to do that,” Thorp said.

Under the Obama-era policy, students accused of sexual misconduct were often denied the ability to cross-examine their accuser and to have access to the alleged evidence against them.

The Obama administration also used a false statistic – “1 in 5” women experience sexual assault in college – that was repeated in the mainstream media to promote the narrative that women in college were frequently victims of sexual assault:

According to the Bureau of Justice Statistics, however, a division of the Department of Justice (DOJ), the actual rate of sexual assault on college campuses is 6.1 per 1,000 students, or .03 in 5. The rate of rape and sexual assault for non-students is actually 1.2 times higher than for students – 7.6 per 1,000.