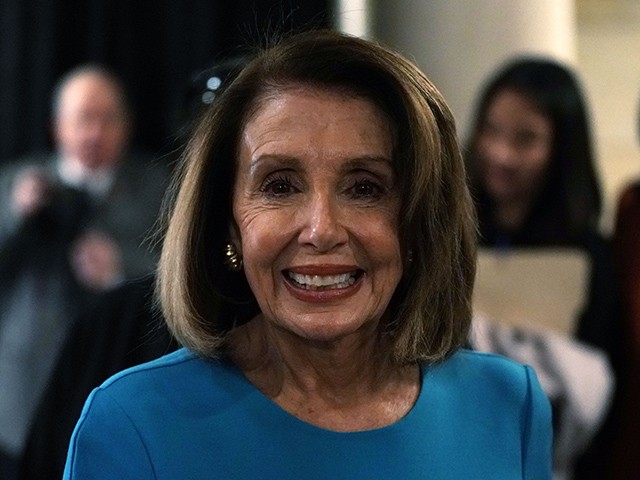 Rep. Nancy Pelosi (D-CA) on Wednesday won the House Democrat leadership election to be the party’s next nominee for speaker after running unopposed.

Ahead of the vote, Pelosi delivered remarks flanked by allies Reps. Adam Schiff (D-CA), Eric Swalwell (D-CA), and John Lewis (D-GA), saying, “[It is] so inspiring to hear my colleagues place my name in nomination once again for speaker of the House”:

Nancy Pelosi: “We had a most unifying session just now in the House Democratic caucus … and it was so inspiring to hear my colleagues place my name in nomination once again for speaker of the House” https://t.co/iMUJ5jNVWX pic.twitter.com/HXdWBgh5N2

Asked if she will be able to whip up the votes needed between now and January 3, a confident Pelosi replied, “I think we’re in pretty good shape.”

Pelosi sealed the nomination by a vote of 203-32, with three ballots left blank and one marked absent.

This was not the plan from Pelosi opponents who vowed to usher in a new era for Democrats. But one by one, the powerful California congresswoman picked off the would-be challengers and smoothed the skeptics. In the end, no one was willing, or able, to mount a serious campaign against the 78-year-old.

“You can’t beat someone with no one,” said Rep.-elect Jahana Hayes (D-CT), who explained in a statement that she came to Washington eager to hear from colleagues and “hopeful that many candidates would step up to the plate.”

In fact, the Democrats are poised to return their entire top leadership team, including Rep. Steny Hoyer (D-MD) in the number two spot as majority leader and Rep. Jim Clyburn (D-SC) as the whip. Likewise, the veteran lawmakers are running unopposed.

Pelosi crushed an intra-Democrat revolt against her bid to retake the Speaker’s gavel next year led by Rep. Marcia Fudge (D-OH) after a 2015 letter from Fudge backing a disgraced former Cleveland judge who was convicted of brutally beating his wife resurfaced in the wake of the man’s alleged murder of her.

Fudge, who had floated potentially running against Pelosi for Speaker and was pushed by anti-Pelosi rebel Rep. Seth Moulton (D-MA), had attacked Pelosi as an “elitist” and “very wealthy person” out of touch with ordinary Democrats in the wake of the midterm election where Democrats retook the majority in the House.

Those who attempted to oust Pelosi said they always knew the internal caucus election would fall in the former speaker’s favor. Rep. Kurt Schrader (D-OR) downplayed the significance of Wednesday’s caucus vote and said the true fight for House speaker will occur in January. “We’re not going to make a big play of it,” Schrader said. “It’s January 3.”

Nine Democrats of the Problem Solvers Caucus, made up of 49 moderate Democrats and Republicans, announced they would support Pelosi after the nominee agreed to proposed procedural rule changes. “It’s a done deal,” an aide told the Hill.

In an interview with David Axelrod’s The Axe Files podcast, the former president lauded the speaker nominee, saying, “I think Nancy Pelosi, when the history is written, will go down as one of the most effective legislative leaders that this country’s ever seen.”