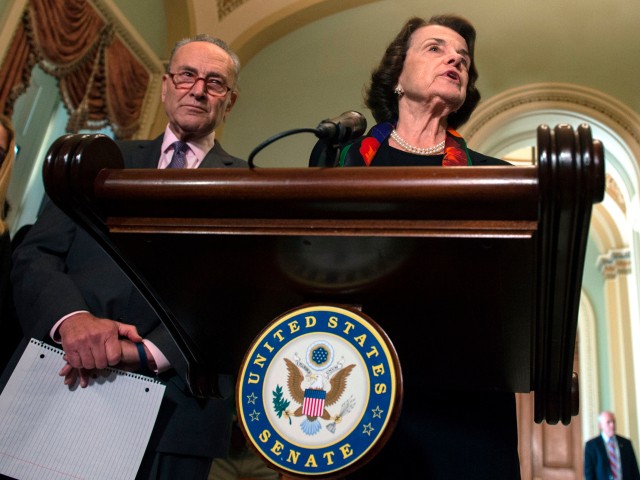 Democrat senators are livid Thursday, decrying the FBI’s probe into uncorroborated sexual misconduct allegations against the judge as a “cover-up” and a “sham,” as Supreme Court nominee Brett Kavanaugh’s confirmation moves into its final stages.

Speaking before reporters earlier Thursday, Senate Minority Leader Chuck Schumer (D-NY) and Senate Judiciary Committee member Dianne Feinstein (D-CA) criticized the FBI’s decision to leave Kavanaugh and Christine Blasey Ford off its list of interviewees, blaming the White House, without citing any evidence, for what they described as a “limited” probe.

“[W]hat I can say is that the most notable part of this report is what’s not in it. As we noted by the White House, the FBI did not interview Brett Kavanaugh, nor did the FBI interview Dr. Blasey Ford,” Feinstein said. “Candidly, what we reviewed today, in a very limited time, I was there. I had to leave. The report is in parts, and I had the opportunity to read some, but not all of it. It looks to be a product of an incomplete investigation that was limited, perhaps by the White House. I don’t know.”

In the same press conference, Schumer claimed his numerous concerns over the FBI’s handling of the investigation had “been realized” and accused the White House of “greatly constrain[ing] the investigation from the get-go.”

“[W]e had many fears that this was a very limited process that would constrain the FBI from getting all the facts. Having received a thorough briefing on the documents, those fears have been realized,” he said.

The lawmaker’s concerns were shared by Sen. Chris Coons (D-DE), who told CNN’s New Day that the expectations of the FBI’s investigation were not met. “Over the last couple of days, there’s been a fair amount of back and forth about what we asked for, what was promised and now today we’ll see what’s delivered,” said Coons. “I’m concerned that if they never interviewed Dr. Christine Blasey Ford or her corroborating witnesses, if they never interviewed many of Judge Kavanaugh’s classmates from Yale who came forward to be heard about the alleged incident with Debbie Ramirez, that this isn’t the investigation I was hoping for.”

Rather than vent to reporters, Sen. Jeff Merkley (D-OR) voiced his staunch disapproval of the investigation and, akin to his Democrat colleague Sen. Feinstein, alluded to supposed White House interference in the probe, without laying out any specific examples how. “I read the FBI report. This whole thing is a sham,” Merkley tweeted. “This stunted, strangled investigation was designed to provide cover, not to provide the truth.” Shortly after, the Oregon Democrat referenced the Bureau’s conclusion as an example of a “horrific cover-up”

Failed vice-presidential candidate Sen. Tim Kaine (D-VA) blasted what he described as a “shame” investigation and complained over measures taken by the FBI to contain details of its findings from leaking to the press. “The whole thing is sham. Five days to do the investigation,” Kaine complained. “And so, here is what they do. There is now a report. One copy. Only one copy that’s available in the Senate SCIF. So they don’t want 100 senators to read it. I’m not allowed to discuss it. The public can’t see it. It’s a complete sham.”

Flanked by far-left Islamist activist Linda Sarsour, Sen. Elizabeth Warren (D-MA) told a raucous crowd of anti-Kavanaugh protesters outside a D.C. federal courthouse that Kavanaugh’s impassionate defense against uncorroborated accusations of sexual misconduct disqualified him from the Supreme Court. “I watched that hearing last Thursday, and I believe Dr. Ford,” Warren said before the angry demonstrators. “I watched that hearing last Thursday, and Brett Kavanaugh is disqualified.”

During a conference call with reporters, Sen. Richard Blumenthal, whose pointed questioning of Kavanaugh’s integrity has earned scorn from President Donald Trump, characterized the probe as a “whitewash.”

“It smacks of a cover-up,” the Connecticut Democrat claimed. “I am deeply disappointed, not in the FBI, but the work product here that is the result of straight-jacketing by the White House.”

Leading up to the Bureau’s wrap up of the probe, some Democrats had already begun to downplay its findings as to whether Kavanaugh’s confirmation should move to the full Senate. In a press conference, Sen. Cory Booker (D-NJ) demanded Republicans replace Kavanaugh with another candidate, pointing to his testimony as proof that the judge lacks the moral fitness to sit on the United States’ highest court.

“My hope is, beyond the vicious partisan rancor that is going on, beyond the accusations, we don’t lose sight of what this moral moment is about in this country, and ultimately ask ourselves the question: is this the right person to sit on the highest court in the land for a lifetime appointment?” Booker told reporters on Capitol Hill. “This is a sacred institution and the people who should be on it — whether you disagree with their political or judicial philosophy at all — the people who should be on the Supreme Court should preserve the integrity of the court, and be beyond the reproach of these difficult partisan times.

Despite the outrage expressed by Democrats, committee chairman Chuck Grassley (R-IA) affirmed in a statement Thursday that the FBI found “no hint” of sexual assault in Kavanaugh’s past and said it was “time to vote” to confirm the judge.

“There’s nothing in it that we didn’t already know. These uncorroborated accusations have been unequivocally and repeatedly rejected by Judge Kavanaugh, and neither the Judiciary Committee nor the FBI could locate any third parties who can attest to any of the allegations. There’s also no contemporaneous evidence,” Grassley said. “This investigation found no hint of misconduct and the same is true of the six prior FBI background investigations conducted during Judge Kavanagh’s 25 years of public service.”

Despite the outrage expressed by Democrats, Republicans intend to hold a Friday procedural vote on Kavanaugh’s confirmation. A cloture motion filed by Senate Majority Leader Mitch McConnell (R-KY) just after 10:00 p.m. Wednesday allows Republicans to bring an official vote on judge before the full Senate, the final phase of the confirmation process.