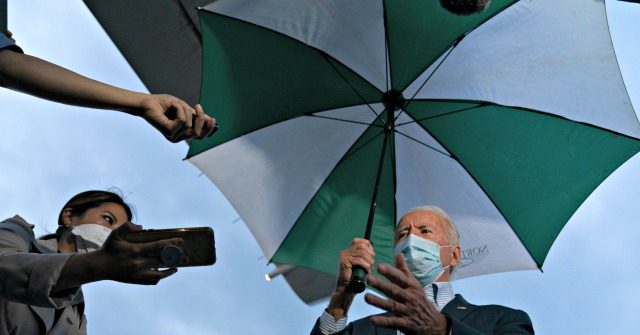 Democrats are focusing huge resources on winning the key battleground state Pennsylvania and its 20 electoral college votes in 2020, a state Hillary Clinton lost by 68,000 votes to President Donald Trump in 2016.

On election day 2016, Trump’s margin of victory over Clinton in Pennsylvania was 1.2 points, 48.8 percent to 47.6 percent, a 6.9 point net swing to Trump from Clinton in the two weeks between the October 24 Real Clear Politics Average of Polls and the final vote tally.

As in 2016, Trump appears to be closing the gap during the last weeks of the 2020 campaign in Pennsylvania.

Republican gains in new voter registrations are one indicator of Trump’s strength in the state, as Breitbart News reported earlier this month:

Since Trump carried the Keystone State narrowly in 2016, Republicans have seen their support grown substantially, according to a voter registration report released in June by Pennsylvania’s Department of State. That report found that between December 2015 and December 2019, the GOP gained approximately 258,705 new registrants. Over the same period, in comparison, Democrats only gained 85,779 new registrants.

Despite the advantage, Democrats still outnumber Republicans in Pennsylvania by more than 800,000 registrants. Although that split seems large, Democrats had an even larger registration advantage in 2016 when Trump bested former Secretary of State Hillary Clinton by just 44,292 votes out of more than six million ballots. Trump’s one percent margin of victory, narrow though it was, made him the first Republican to carry Pennsylvania since President George H.W. Bush’s 1988 landslide.

Since Trump took office, Republicans have only seen their support grow across the commonwealth. Much of the GOP’s success both in voter registration and electorally seems to be coming at the expense of Democrats. In 2016, Democrats accounted for 49 percent of Pennsylvania’s electorate. Today, they only account for 47 percent. The defections have been most noticeable in western and northeastern Pennsylvania, where Trump’s populist appeal appears to be fomenting a political realignment.

Democrats realize that in the anticipated tight 2020 electoral college race, winning Pennsylvania’s 20 electoral college may be what is necessary for Biden to reach or surpass the 270 electoral college votes necessary to win the presidency, so they are devoting significant financial, legal, and high profile star power resources to secure victory there that slipped away from them in the final days of the 2016 campaign.

The Biden campaign’s television buy in Pennsylvania is much greater than Trump’s, as The New York Times reported on Sunday:

Mr. Biden has maintained a nearly 2-to-1 advantage on the airwaves for months. His dominance is most pronounced in three critical swing states–Michigan, Pennsylvania, and Wisconsin–where he spent $53 million to Mr. Trump’s $17 million over the past month, largely on ads assailing the president’s handling of the virus as well as the economy and taxes, according to data from Advertising Analytics, an ad tracking firm.

In Pennsylvania alone, Mr. Biden ran 38 different ads during a single week this month, a sign of how comprehensive his effort has been there this month.

The Biden campaign will unveil the star power of former President Barack Obama on Wednesday at a Biden rally in Philadelphia.

Last week, Biden chose Philadelphia as the site for the ABC Town Hall held in lieu of the cancelled presidential debate.

Democrats also fought desperately to make “several changes to mail-in voting that critics have decried as vulnerable to fraud,” which culminated in a highly partisan and divisive legal battle that ended earlier this week in a four to four Supreme Court decision that lets the Pennsylvania Supreme Court ruling in favor of the Democrats stand.

With two weeks to go until election day, the concentration of fire power focused on Pennsylvania by Democrats suggests that the leadership of the Biden campaign, haunted by the bitter memory of a 6.9 point net swing towards Donald Trump in the last two weeks of the 2016 campaign, believes the Keystone State is still in play.