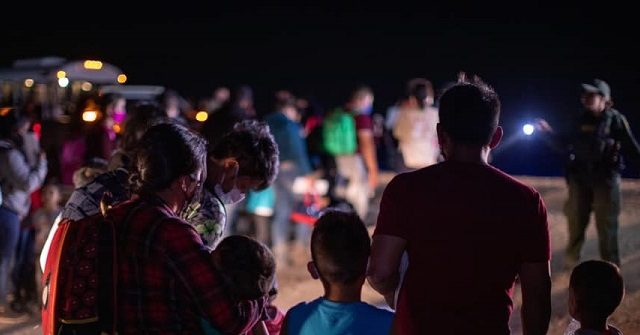 Sen. Jon Tester (D-MT) told Business Insider that Democrats should look at passing a “comprehensive immigration bill,” a term synonymous with amnesty and expanded legal immigration, as a way to cut inflation.

Tester laid out a trio of steps that he thinks will cut rising prices in this environment:

Tester’s remarks come a month after Chamber of Commerce CEO Suzanne Clark begged Republicans and Democrats to provide amnesty for illegal aliens and double legal immigration levels so as to provide big business with a never-ending flow of foreign workers to hire at low wages.

“We must double the number of people legally immigrating to the U.S. and we must create a permanent solution for the ‘dreamers’ — those young men and women who know no other home and who contribute to their communities, but whose legal status is in limbo,” Clark said.

The Chamber’s policy suggestion would bring anywhere from two to four million legal immigrants to the U.S. every year — an annual foreign-born population nearly six times the size of Boston, Massachusetts.

In contrast, pro-American immigration reformers have said House and Senate Republicans must take a fierce “pro-border, pro-citizen, pro-worker, and resolutely anti-amnesty” position in the midterm elections and while legislating.

Rather than amnesty and increased immigration, reformers told Breitbart News that legal immigration levels ought to be majorly reduced to boost U.S. wages for the nation’s working and middle class with a tightening of the labor market as well as reforms like nationwide mandatory E-Verify and a total elimination of the outsourcing H-1B visa program.

Currently, the U.S. gives out 1.2 million green cards to foreign nationals every year while about 1.5 million temporary work visas are rewarded to foreign nationals to take American jobs. The massive waves of legal immigration have led to the highest level of foreign workers in the U.S. economy in decades, making up at least 17.5 percent of the workforce.

Legal immigration levels have driven the U.S. population to a record 331.9 million.